My wife found the tickets while poking around Craigslist late one night.  “Hey do you have anything planned in the morning?

I’m forwarding you a link for free Matisyahu tickets.”

There were ten of us in the live studio audience of  “The 10 Show”, a Philly morning show that had me remembering Bob Saget and looking behind curtains for Uncle Jesse… I of course have no idea what I just made reference too… I never watched that show, it was my little sister…

The hosts had never heard of him, or heard his music, but judging by the 7 hipsters and the two guys with yamakas sitting with me, the performance would be appreciated.

His song “One Day” is being used as NBC’s theme song for the upcoming Winter Olympics so he sang it three times.  He sounds better live than on record and after the third time through I was no where near tired of it.

After the show he sang a couple more songs, the producer gave us one last “applause” cue, and we were done.  People sort of hung around afterwards waiting to see if Mr. Matisyahu would come hang out.  He didn’t.

While crossing the frozen and empty parking lot we spotted a tall Orthodox Jew getting into a beat up red Acura.  You don’t see that every day in Philly so we went and introduced ourselves.  We made plans to hang out and talk about Bob Marley and be best friends but ya know, we are both pretty busy these days.

Philly has it’s Cheessteak, Baltimore the crabcake, Maine the lobster, and Pittsburgh… the Pimanti Bros.

You have the choice between steak or Pastrami, and when it comes to sandwiches, the answer should always be pastrami.  Along with your finely processed meat, the bread is piled high with french fries, tomato, and cold slaw.  A Pittsburgh orginal!

Sadly this culinary masterpiece will not inspire a return trip.

As I walked dissapointedly back to the van I passed a pastry shop with a line coming out the door.  “Dozen” is small, friendly, and specializes in cupcakes.  Cupcakes are fine but how could I resist a cookie jar with the label “double chocolate bacon”?  Top that off with a cooler of craft brewed sodas and I’m sold. 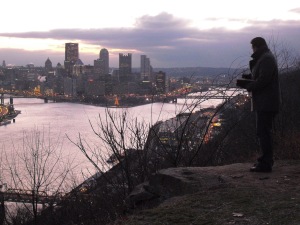 I knew they liked their teams but I did not expect the whole town to be painted yellow and black.  Not only did the buildings and bridges sport the team colors, but the locals as well.  Men in ties on their way to work sported Steelers beenies, woman shuffled to offices in pantsuits and Steelers parkas.  It was not only outer wear but inner investment.  I overheard a conversation between two 50 something women in an employee break room discussing the importance of diversified play calling to take pressure off of a quarterback.  I peeked into the room and despite my best efforts could not find the teleprompter they were reading from. 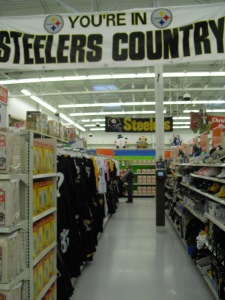 I walked over the Andy Warhol Bridge, turned right, and kept going till I hit the place where three rivers came together, and a fort once stood.  Fort Pitt was a focal point in the French and Indian War and the wilderness edge of colonial America.

What I found there was a concrete outline on the ground where the walls once stood, a plaque on the ground, and “closed for renovation” sign on the museum door that looked as if had been undisturbed for months.

I abandoned the old and historic for the Pop and modern.

Not only does the Andy Warhol Museum contain large and repetitive etchings of Elvis, but skinny jeans, round glasses, and a white wig worn by the weird one himself.  In addition to the permanent collection the museum was also showing Shepard Fairey’s  ” E Pluribus Venom” show, which includes his now iconic Obama Hope poster. 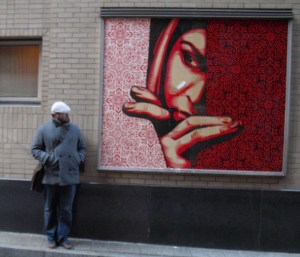 I took my first shower at a truck stop in Lewisburg Pennsylvania.  I was unsure if the travel store, the one with all the 18 wheelers parked out back, really had showers as I couldn’t find them.  After about three inquisitive laps through the store and café, with large bearded men watching me as they sipped coffee, I had to ask the attendant.  So much for acting like I knew what I was doing.

He told me the showers were upstairs.  “Eet eez ten dollarz.  There eez towels, soap, everything you need but voman.”

He handed me the slip with my code to open the door and I stepped into a large bathroom with a shower, mirror, sink, and a plastic seat tucked under the counter.  Aside from haunting thoughts of truckers with “voman”, it wasn’t half bad.  I loaded my dirty clothing into my backpack, took one last look in the mirror to make sure I was presentable, and headed back out to the van.

I patted every pocket, turned my pack inside out, and finally found my keys by peering through the window of the van.  They were on the driver’s seat where they had fallen out of my coat pocket.  I was forced to go back inside and ask the Carhart clad crowd if anyone had a slimjim.  They didn’t.

I walked back to the garage out back where three mechanics were unlocking for their 7:00 open time.  I explained I had locked my keys in the car to which they just answered by yelling, “Daryll” towards the back of the garage. “Got it,” he responded as he tucked two slim jims in the back of his belt, grabbed his coffee mug, and started toward the parking lot.  I followed.  “I do this at least twice a week (I felt a little consoled).  Ahh, it’s a new model, what an a’07, ’08?” he asked as he approached a white sports car.  “I’ts actually a ’99 and over here,” I corrected, pointing him toward the van.

After ten minutes of trying both doors and both slimjims (two sizes), we turned our attention to the back door where the lock had been removed by the previous owner.  He went back to the shop for a screw driver, flashlight, and a smoke.  He returned in his little gold coupe, having driven the 20 yards back from his shop.  The back door didn’t work.

After another hour we turned to the side doors.  One of the side doors has an external hinge, much like any household door.  Daryll (spelled with two Ls according to his shirt) took another trip and returned with a drill that he bragged had superior torque and cost him $400.  The torque was great for removing the hinge but not in opening the door.  He waved the drill at the waitress and shouted “morning gorgeous”, as she crossed the lot on her way to work.  “Don’t tell my wife,” he chuckled more to himself than to me. Next we tried a coat hanger.

I was holding the door seal ajar with a screwdriver while Daryll fished for the latch with the hanger.  As the clock ticked along he became more and more determined.  He also became more talkative.  Climbing on the hood inspired tales of his knee surgery due to a football injury his senior year.  He had three scholarship offers before the injury but is consoled knowing he still holds the school record for receiving yards.  A waitress leaving the truck stop inspired another “morning gorgeous”, and some tales of Daryll’s female conquests.  In the end it took three hours and I left grateful for Daryll’s help, sixty dollars worth of grateful, and now know that my van is just slightly less secure than Fort Knox.

Do we still keep gold in Fort Knox?

The sign said cheese and the front of the store had “free samples every time” painted on it.  Why wouldn’t someone stop for that?

Once inside you will find all sorts of varieties leaning more toward sharp cheddar mixed with bacon or jalapeno than brie and gouda.  What they do, they do well.  They also pack their own sausage, cure beef, and in a cooler you find a wide variety of Amish jerky.

The location and event commemorated by an address, fields, statues, a museum… pause for reflection.

Which state right caused the fight?