The best word is unexpected.

Not only does the quiet, unassuming guy rap, but he raps about Mormonism.  As if the assumed contradiction in that last statement wasn’t enough… he’s really good.

His music is so good that to label it with the prefix religious feels unfair and discrediting.  Yet the music, and the man who makes it, is overtly religious; he does not feel lessened by the category.  He is simply someone who has something in him that needs expression and he has an unusual gift in expressing it.

In my youth both my religious culture, and that of Hip-Hop, were tainted by a little ditty titled the “Mormon Rap”.  This tongue in cheek, self mocking song, made it obvious that the culture and the genre could not cohabitate and established this idea as fact.  Someone forgot to tell Beloved.  Not only that, but I don’t think the contradictions ever even occurred to him.  This is evident in that nowhere is the equivalent of “Yo, look at me, I’m Mormon,” work its way into his lyrics, rather he laces together distinct LDS doctrine with personal essays.  He’s not opposed to a laugh, but he isn’t joking.

He is at this point completely undiscovered.  It is a shame that should soon be corrected.  If you are in, or can arrange to be, in Salt Lake City the night of March 18th, go see his first ever performance, on his first ever trip to Utah.  You need not like Rap, or like Mormons, but you may leave changed on both accounts. 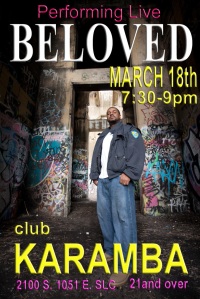 Yet again, I find it difficult to recover from the laziness of my academic youth.

… and yesterday, and the day before.

I sit and read Lawrence’s Seven Pillars of Wisdom, filled with adventures, travels, and explosions.

Lawrence saw Arabia, I saw a man try to take his bike onto the “quiet car”.

The van is gone.  I await the moss. 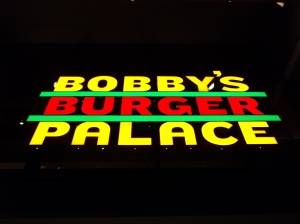 I refused to watch Mr. Flay’s new reality show, but I cannot refuse his food.  I would normally say the last thing America needs is another chain burger joint, yet I have been converted. 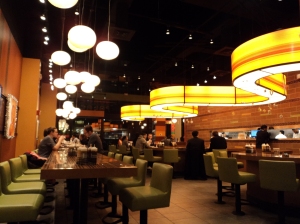 In n’ Out, Checkers, Crown Burger… naw, I still like Crown Burger, will not only be forever relegated to the backseat in my book, but they are no longer even on my map. 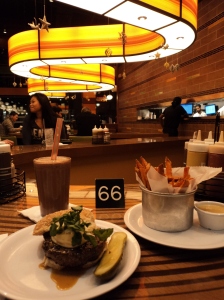 Chopped sirloin, arugula, and goat cheese equal bliss.  Add to it a side of sweet potato fries, a dark chocolate shake, and I am falling off my stool in a happy stupor.  Mock my burger for trying to be too froo-froo or shee-shee, or pinkies out, say anything you want, just make sure to take small enough bites to leave room for some crow and your foot.

Surprisingly affordable, very convenient, and worth having to buy larger pants.

Again, today the story is elsewhere.  Check it out