Watts, a neighborhood in LA, has a reputation among some as a dangerous place. So much so that when we looked up directions and reviews of the Watts towers we were told there is no parking, the neighborhood is dangerous and you should only go there with a paid tour. Don’t believe that. 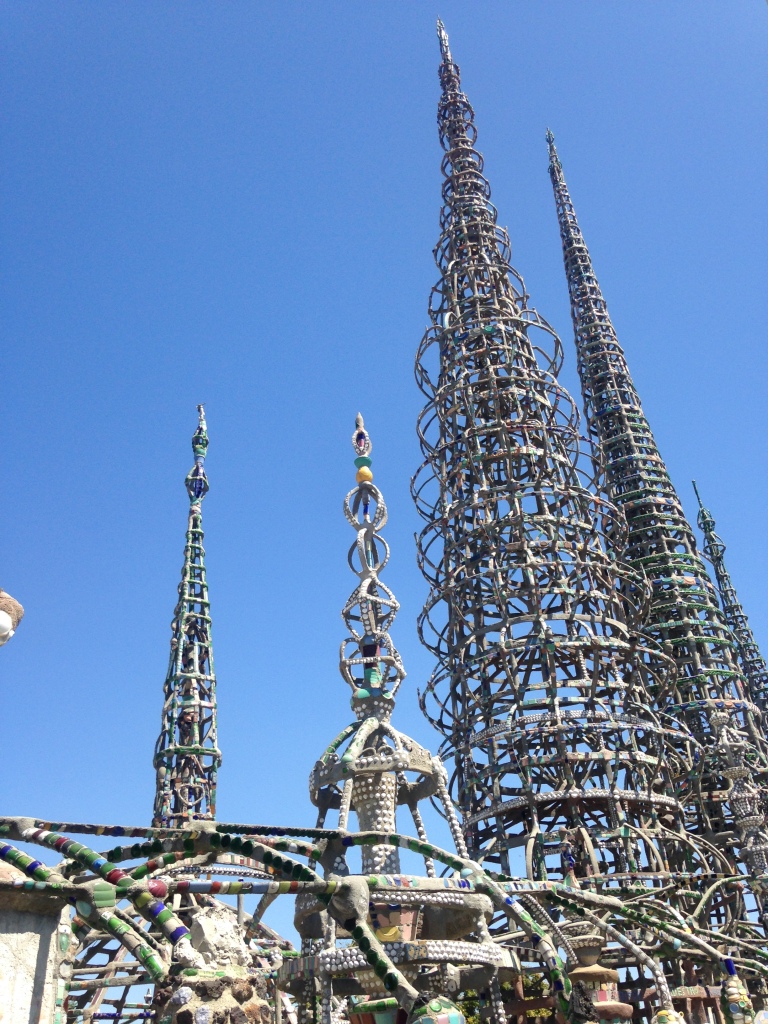 I’m not exactly sure what Watts was like in 1921 when Sabato Rodia moved in, but it appears Rodia wasn’t satisfied with the place. Maybe he was bored, or just had a vision, I couldn’t say. But I do know what he did; he built something inspirational.

It was,or rather is, inspirational in that this guy, and really he was just some guy, a construction worker, took it upon himself to do something. If those towers that he built out of scraps and broken things was the result of boredom, awesome. He conquered his boredom. 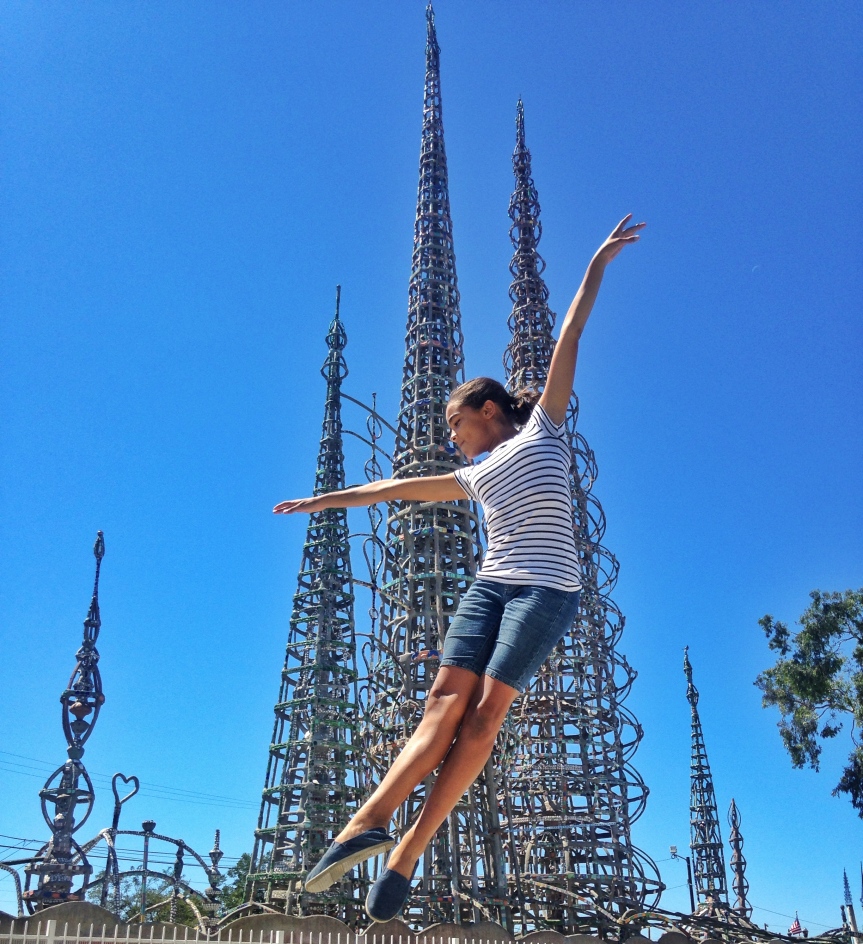 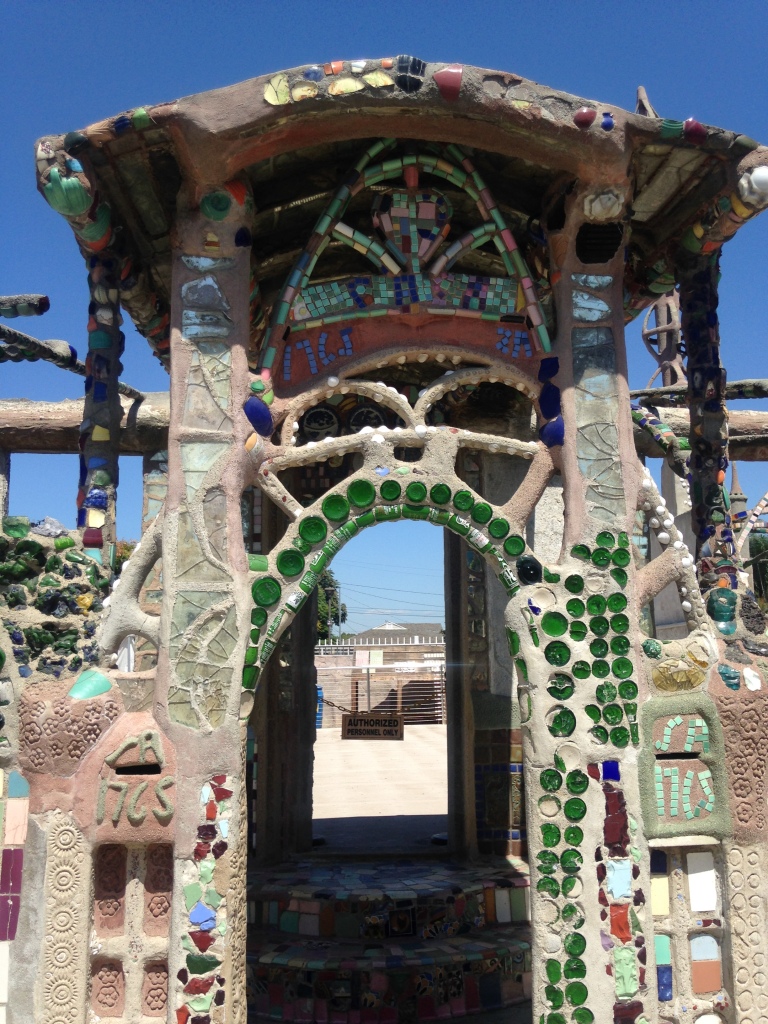 Not everyone was cool with his towers. Well, mostly the neighborhood was cool with it but the establishment wasn’t. He didn’t have a permit. It would have been hard to apply for a permit especially since he had no plans before or during the building. He just kind of built it. He built over a span of 33 years. 33 years to build a complex system of concrete and re-bar towers standing 99 feet in the air.

The City of Los Angeles ordered the towers torn down. 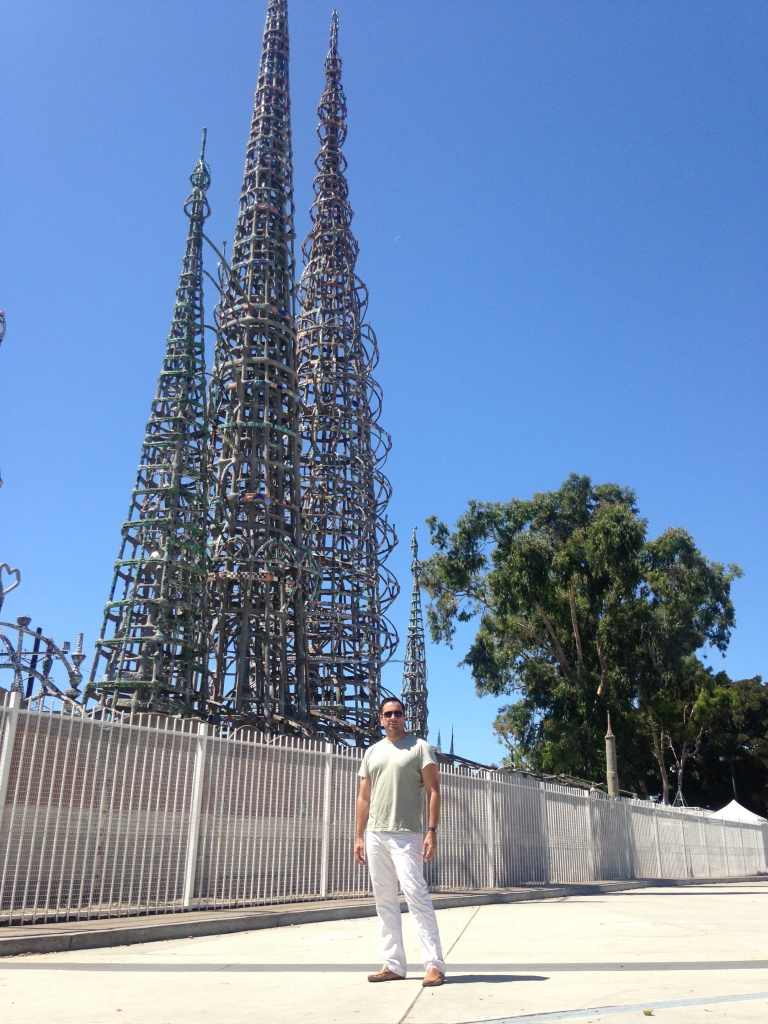 But he didn’t do it. He persisted in not tearing down the towers till he was too old to argue and he simply “quit” the property and moved away. In 1959 a couple of actors bought the place with the intent of preserving it. LA is a town that respects its actors and by the late 50’s the whole world knew about these things, they were already icons.

They are there and they are worth going to see. Ignore the online whimpering from people who think there are parts of town that simply can’t be visited. The towers have survived there this whole time, you can survive an hour.

I love design and style. I love the clean lines and angles of mid century modernism, but I now have a greater appreciation of how hard mid mod is to pull off without looking like an outdated gas station. 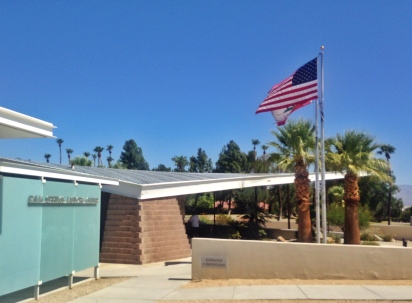 I think maybe it is because this particular aesthetic only works if the clean lines are accentuating other stuff that is equally cool. You have to go all in. Otherwise those clean lines just look like half baked, half finished, cheap construction.

I learned all of this while growing up in 1980’s suburbia but I realized it in Palm Springs. 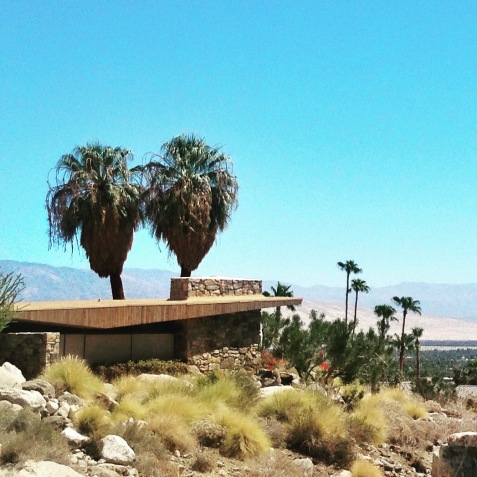 So the above is the Edris house built in 1954. I like it. Well done Mr. Architect. I drove past it but did not go inside as someone lives there and they don’t know how awesome I am and consequentially did not invite me into their living room. A loss on both our parts. 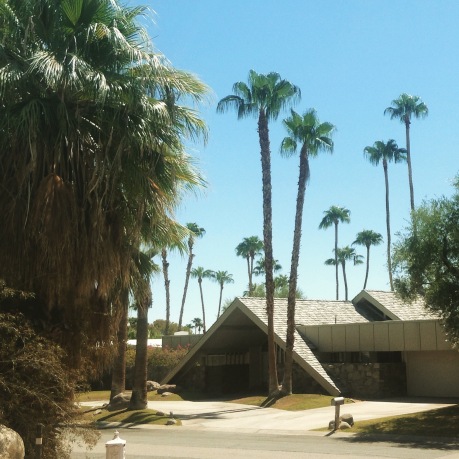 I have no idea who owns this house, when it was built, or anything other than that the triangular roof stretching down to the ground, coupled with the straight horizontal wings works for me. It also makes me dislike the standard mailbox standing at the curb. Come on mailbox, your address is THAT and all you got is this? Disappointing. 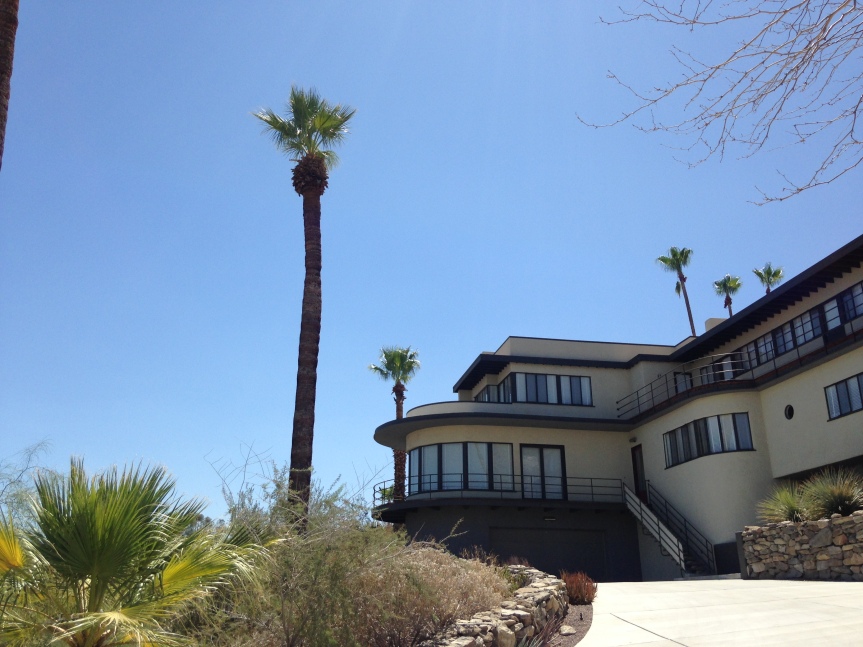 Now this place is nice but maybe not all that remarkable till you realize it was built in 1936. Back then people drove big giant Buicks, wore fedoras sans-irony, and George Jetson hadn’t been born yet. Still, someone I’ve never met lives there now so we kept on driving.

And right about here, about the time we just drive past another place that is probably cool, I realized mid century modern isn’t all that hot when the later half of said century was spent recreating the mid part with no attention to style but solely because of speed and cost. That stuff is everywhere. There is a word for it I won’t use, but I will say it is done half-way and that ruins everything.

That is how I felt about Palm Springs when I didn’t get to go inside anything. 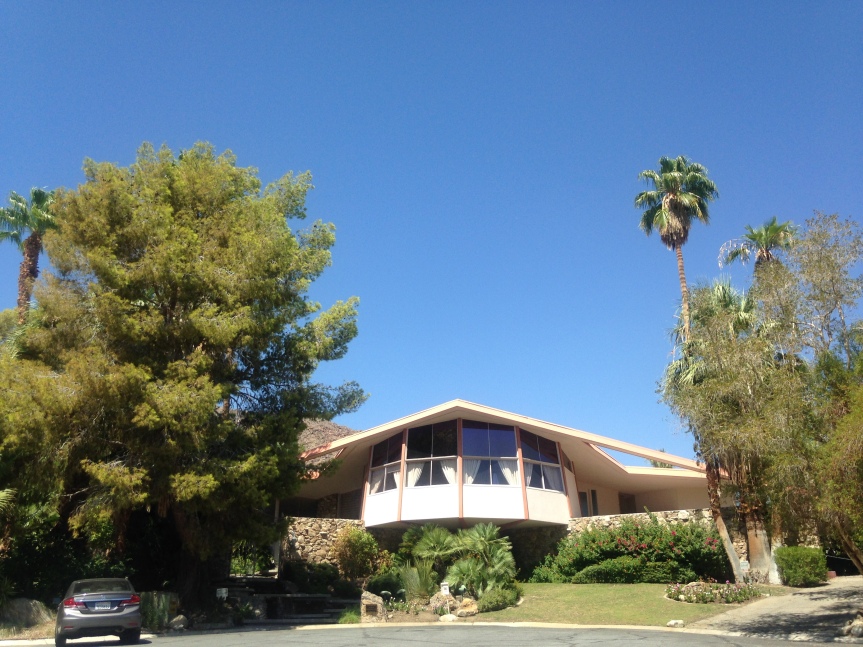 For instance Elvis used to live in this house. Him and Priscilla spent their honeymoon here. But they don’t live here now and since those days the 1970’s happened and consequentially this place feels kind of “meh”. 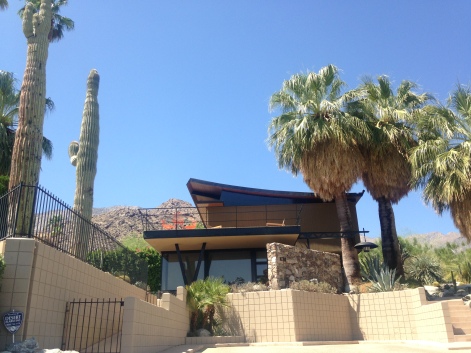 This place looks great. The orange chairs are a perfect place to sit while wearing white linen pants and a fitted pink button down. But maybe not a great place to have a sink full of dirty dishes or an overstuffed sofa.

I didn’t get to sit in the chairs and my own apartment has a sink filled with dishes and driving around in the heat I didn’t really feel anything. I was never immersed and this style doesn’t work if you only skim the surface. 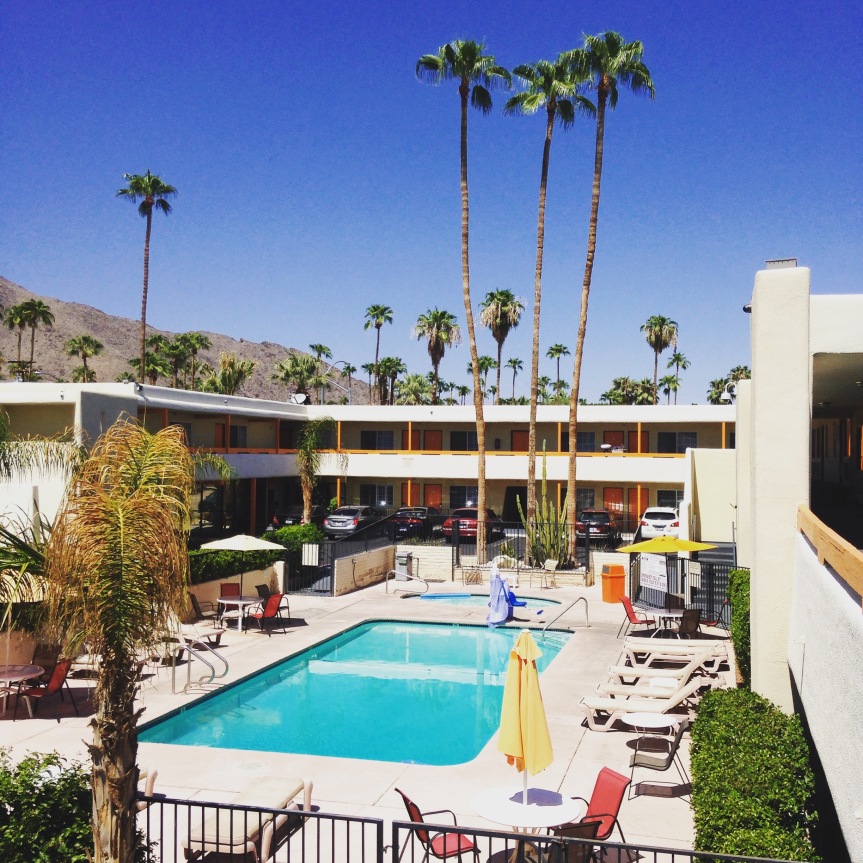 Not sure I’ll head back out there without a real good reason… like maybe a dinner party with a dress code. at the end of the day, the below was the most interesting thing in town. Sadly, everyone there thought kava was a word for coffee. 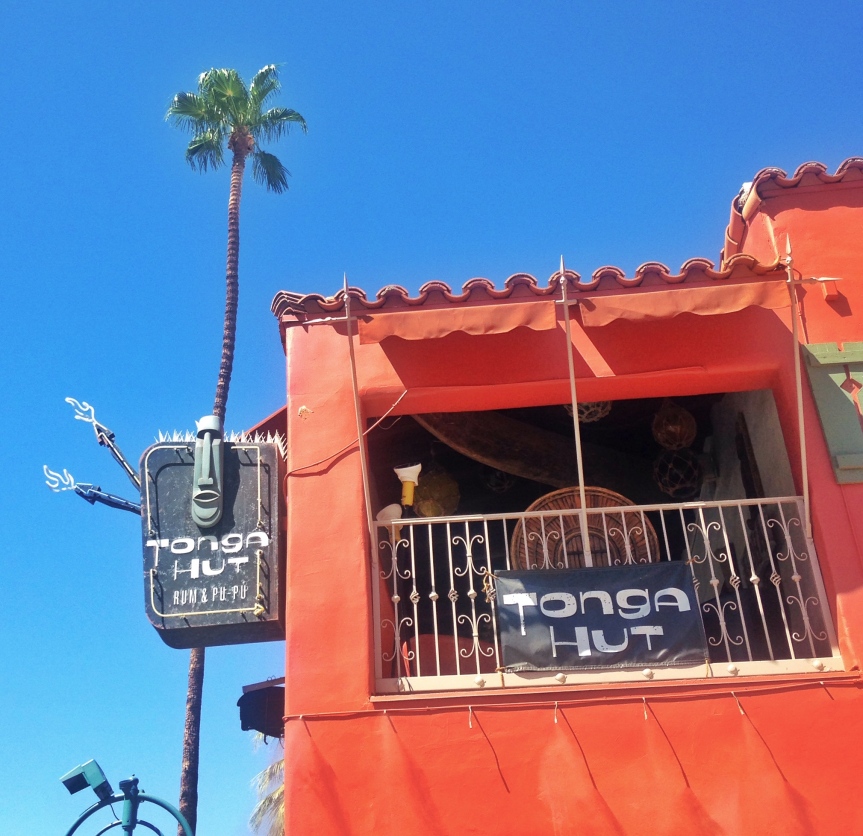 Politicians can argue all they want about who needs to speak what language where, all I know, is that I need to learn Spanish. I recently found myself in a palace of frozen treats, all of which looked delicious, and I had no idea what most of them were as I am bound by my American monolingual shortcomings and couldn’t read the menu. I have a tongue that is linguistically one note but spread with adventurous buds. 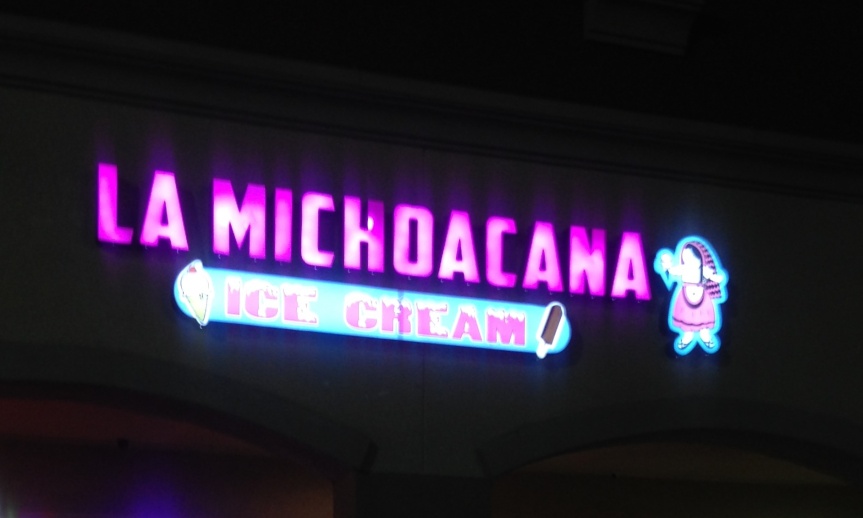 While in Riverside I just typed “ice-cream” into my map app, and it gave me Cold Stone, Wendy’s, and La Michoacana. I yelped the one I had never heard of and thanks to a five star review I hit “navigate”. There was no such navigate button once I arrived and my senses were overloaded with new sights and new words.

Some things I could read, like chile, queso, and pepino. All of these were written above tubs of ice cream. Chile, cheese, and cucumber flavored ice cream? Cheese ice cream is surprisingly good. Cucumber ice cream is fantastic. 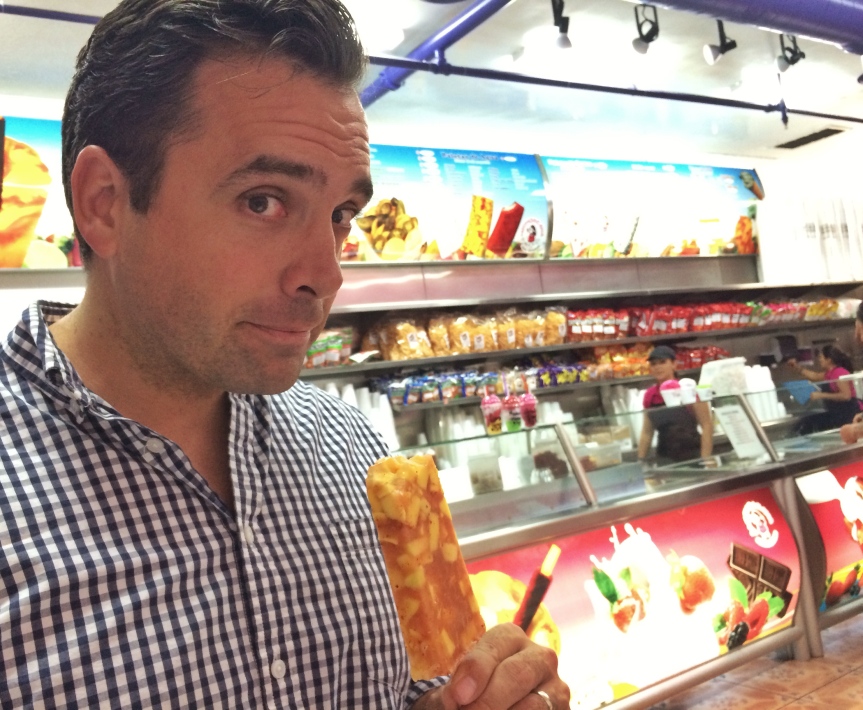 Standing over a counter transfixed by new ideas with what little words I could figure, I saw the family next to me receive a take out tray piled high with… I have no idea what it was. The worker drizzled something over the top of it, handed the woman a fork, and with a smile, said woman went and sat down. Experiencing an unusual moment of bashfulness, I could not muster the courage to ask either the family or the employee, what that pile of whatever it was, was. Instead I pointed into the case and asked, “is that a mango chili popsicle?” The worker said it was and I said “por favor,” handing her my MasterCard. 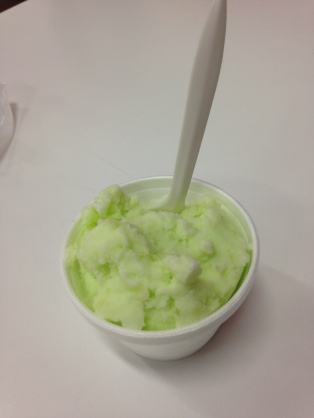