Hollister Hovey is a great name, very alliterate.  There is something in the number of syllables or the near symmetry that gives it a pleasant flow.  Better than the flow, or than the name itself, is that it is genuine.  Ms. Hovey was gifted this name by parent, not agent.  Who needs an agent when you are born into this sort of thing?

By, born into it, I mean her mom did PR and her Dad had a clothing and wares shop in Nebraska.  Add to those roots a dash of New York polish, some Washington and Lee refinement, and you have the genetics to create the sort of blog both Teddy and F.D. Roosevelt would appreciate.  The presidents Roosevelt would not be alone as approximately 2,000 people per day visit Hollisterhovey.blogspot.com.

I admit I am one of them.  Or possibly I am three of them.  I go often.

When we sat down at the Oyster Bar in Grand Central Station to talk I asked Ms. Hovey if she could in any way guess how many New York apartments sported taxidermy before her blog, as compared to now.  She simply laughed and sort of rolled her eyes.  She claims it started when Freemans opened and that she doesn’t deserve the blame, but as I had never heard of Freemans (my loss), I give her full credit.

The blog began as a place for Hollister to display her paintings.  She was doing custom wedding invitations, a hobby of sorts, and needed a venue to “show off”.  Around the same time she hosted a string of international visitors who were in want of destinations centered on a certain taste, and the advice she gave grew into the string of recommendations on the right hand column of the blog today.

I think taste is the right word.

When eating, one enjoys flavor.  One wants the ingredients to compliment and play off of each other without getting lost in a mess of confusion or clutter.  Some chefs take the tact of scaling things back in minimalist fashion.  Ms. Hovey does the reverse in a way that would make Julia Child proud.

The blog displays shots of places and things, the Hollister apartment mostly, that are usually old, outdoorsy, and often European.  She stews together stuffed pheasants, pewter miniatures and pith helmets, in a way that doesn’t appear dusty or distasteful, or even messy.  She does it well enough that her apartment was recently featured in Elle Decoration UK.

This is not her training or even her job.  Hovey does PR for the medical industry and quite likes it.  By the way she talked with me, relaxed without ever losing her polish; I assume she is quite good.  But her blog is better than good.  She explains it by saying she doesn’t post anything she doesn’t truly like.  The taste she portrays is truly hers, as opposed to some learned theory or prescribed list dictated by others.  I suspect her taste is somewhere being written and dictated to others.  She has created spaces that are more curated then decorated.  In fact, I think she wrote that line on her blog somewhere, or at least it was written about her somewhere, and I later wrote it on my own blog… so in some way she is dictating taste to me.  I am comfortable with that.

Comfortable like our conversation at the Oyster Bar.  Comfortable enough that she confessed to buying men’s shoes (they are made better) and I confessed to feeling in costume when wearing a hat.  She smiled and quipped that we all love the costumes in period pieces, even if we would never wear them.  That is how she summed up her blog.  It is a reflection of things she has always loved; quality craftsmanship, the finer things, and cool costumes.  Things you can like even if it isn’t your thing.

I think it’s more, things we like, and wish were more our thing.

I sold the van.

On Monday I will be tucked cozily into a cubicle at a “respectable” job.  Nine to five, Monday through Friday, forty minute commute; I will be one of “them.”

This is just one step in a larger plan.

Yesterday, my plan was to make like Napoleon (Dynamite not Bonaparte) and do what ever I want.  Had my wife granted herself her own day she probably would have spent it in some family activity focused on the children.  I wish I was, but am not, that selfless.  I boarded a bus and went to the city.

I travel better by myself.  No worrying about if others are bored while I am entertained.  No ticking from the time bomb built-in to all children; just me and my own fancy.

I will spend the foreseeable future constrained by schedule, on this trip I defied planning and let whimsy be my guide.  Except for that one appointment in the afternoon, the bus schedule, and a budget.  I am not very good at whimsy.

The temple, a museum, and a library; look out I’m out of control.  Some time earlier I dropped my camera and lost the ability to see the images on the camera.  I now shoot from the hip.

Perhaps it is my appreciation for the honorable Robert Nesta, but finding myself in a room filled with third century books of scripture, I spent my time squinting at Coptic writing from Ethiopia.

Television tells of our society being in decline.  We are taught to fear urban centers and the youth therein as dangerous.  Public libraries, full of common folk, encourage me to turn the television off.

The internet puts the whole world at our fingertips.  The East Coast puts a good portion of the world available for personal visits.

Ms. Hovey gives good dinner advice.  After our meeting I moved on.  I have no shame and do not find dining alone in any way awkward.  The conversation is of course lacking but the company is always top-notch.  On this occasion so was the food.

Day trips to places that aren’t your home, traveling alone, get tiring by the end of the day.  I love New York at night but the excitement of it is lost when there is no one with which to share, or when your knees hurt and the only place to rest requires a purchase.

Had I a van I would retire to the hammock.  But isn’t this the city they say never sleeps?  I suppose the city wanted company as much as I did.

There are those who clean properly and there are those who sweep things under the rug.  This good man is one who comes later on, to peel up the carpet to see what was left behind.  He is testimony to me that one should seek a mix of associations in order to have others around who encourage you to do things that would have never occurred to you on your own.

One day this city and society will clean up the messes we leave behind.  Till that day there will be urban exploring.

There are few if any places left on earth where man has not been.  What is a displaced adventurer to do?  We go where man once was and has since abandoned… except for people with spray paint.

We walked there from home, walked right in and out, and skipped the second floor after determining that standing on its floor would likely lead us to first a visit to the basement, then likely the hospital.

This is how it is here.  We live near, and accept, damaged goods.  There is value in finding the good in that which has been cast off as refuse.  Things swept under the rug still exist.  Not only does it exist, but it inhabits the same room and space as this…

Both are here, we should ignore neither.

How was your weekend?

In a town where the favorite native son, is a fictional character, there may be a need to defend the idea, or at least explain it.

Have you ever felt helpless?  Hopeless perhaps?  Ignored, discounted, discarded?  So does Philly. 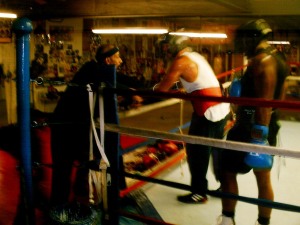 We were once the capital of the United States.  We were once one of the world’s largest cities, a bastion of commerce and opportunity.  Then we weren’t.  It still hurts.

Rocky, the washed up unloved nobody, got his shot and won.  We like to think we could too.  While we have some pride in our local ivory towers, we have a deep love for iron fists.

We threw snowballs at Santa Claus and booed our number one draft pick.  We don’t talk pretty or even clean our streets, but we sure can fight.  We are the adopted home of the high-end gastro-pub, but the birthplace of a good pummeling.

We all think we can win like Rocky did… but mostly we just kinda run around town and feed our turtles.

I LOVE this city.  (click on the gravestone and see who it is.)

It was art.  Beautiful, strange, meaningful, and shocking; both the people and the paintings.  I stood back and watched to see what the people were watching.

The show included nearly three hundred works by one hundred artists.  Groups of two or five would scour the walls looking for the products of friends and family.

Pretty portraits of flowers drew lingering looks, and the buzz of the place was over the picture created by gluing short human hair to the canvas.  The crowds included old people dressing like they were twenty, and the young hip kids wearing grandpa’s tweed.  And then there was me.

This is not my living.  I create images with my gaze as the motivation and goal.  Creating art in such a manner has an odd way of making me feel myself out-of-place if my images don’t fit in.  I am my own niche’.

I am comfortable with this.  Others disinterest has no effect on my own.  My works are more illustrative than artistic and the stories are not always common, but they are mine.  Like the story of why I changed my major from art after only one quarter.  To this day I have no permanent ink upon me, no piercings at all, and I have no fondness for anarchy.  I was the only one like me in school, and back then I was young and lonely.  Now I am neither.

The show is up all month and the art is for sale.  In such a case being a “sell out” is good.  I have been a corporate sellout since I changed my major and it would be nice to be one now that I’m drifting back to my true self.

Go check iyt out at: the 3rd Street Gallery on 2nd Street.

If digital views of artwork are not your thing, I have just the remedy.  This coming Friday three paintings by Brohammas will be up for sale at the 3rd Street Gallery on Second Street, in Old City Philadelphia

Of course mine will be among approximately five million other’s works, so let’s have some fun.

All three are pictured on my “artwork” tab.  First person to post the name of all three pieces featured at the show, will get a free sketch.  Sorry, no out-of-town guesses, this is one of those highly unfair local features.  Just as a hint, I don’t sign my work “Brohammas”.

I’ll be hanging around the gallery from 5-9, so come say hello.