In 1935 Bruce M. Wright was accepted to Princeton and awarded a merit scholarship. When he arrived on campus the administration realized Wright was black, and they refused to enroll him.

This isn’t all that interesting or unusual, because it was so normal. We have all heard these sorts of stories before. I’m telling tis one now because I think it is worth looking at what the white men of Princeton said about it at the time. You know, so that maybe we won’t be doomed to repeat it and all that.

In explaining the University’s change of mind, Radcliffe Heermance, the dean of admissions, shared with no intent at irony that, “Princeton University does not discriminate against any race, color, or creed. This is clearly set forth in the original charter of the college and the tradition has been maintained throughout the life of the University”

Heerman went on to explain that he in fact likes black people, “I speak as one who has always been particularly interested in the colored race, because I have had very pleasant relations with your race…”.

He went on to explain that he could not come to school there as he would be the only black person and hence would feel lonely. He also shared that there are quite a number of southern students at Princeton and they would not like sharing their school with a black person. They would make Wright to feel unwelcome.

So Wright was sent home against his will.

In other words, Heermance, with no intent of irony, told a black scholarship recipient that he could not attend Princeton, because white students didn’t want him there, but that this didn’t constitute racism. Because Princeton’s charter stated that they don’t discriminate. It was obvious is both Princeton’s actions and explanation how they ranked and valued humans. The racism of white students was acceptable, worth accommodating, but the presence of a black student was not.

America as a body, has decades and decades of practice doing racist things and explaining that it isn’t racism. Such is evident in the original Constitution, in the way our economy functions, and in so many official documents, judgements, and practices in so many places, locales, and institutions, that trying to separate out racism from these things is like trying to extract the salt from a baked loaf of bread.

I am not sure if this is possible with bread, but I have hope for America. But if it is to happen we cannot over simplify the task at hand or take explanations at face value. We have to step back and evaluate the consequences of our actions and the values they make evident.

And we have to change.

In 1925 a Utah businessman having just sold his car dealership was looking for a new venture. Having a good sense of his market he moved from selling cars into selling fried chicken.

He opened a cabaret restaurant and called it “The Coon Chicken Inn”.

The spot’s décor featured a black face minstrel, complete with over-sized grin, bright red lips, and a winking eye. The icon was plastered on all of its menus, the napkins, the catering delivery trucks, and then there was the front door. Patrons entered the establishment by walking through the mouth of a gigantic black-faced minstrel head.

The owner wasn’t making business choices based in some specific hatred for any one person, or out of spite toward a group of people, he was just looking for something he thought would work. Something that would sell. And it did.

The place was popular enough in Utah that the owners were able to open franchises in Portland and Seattle. Now this is not to say that no one thought it offensive or wrong. In fact the NAACP sued the restaurant claiming their theme was racist. Because it was. But the owners, and the general white population, simply didn’t care. 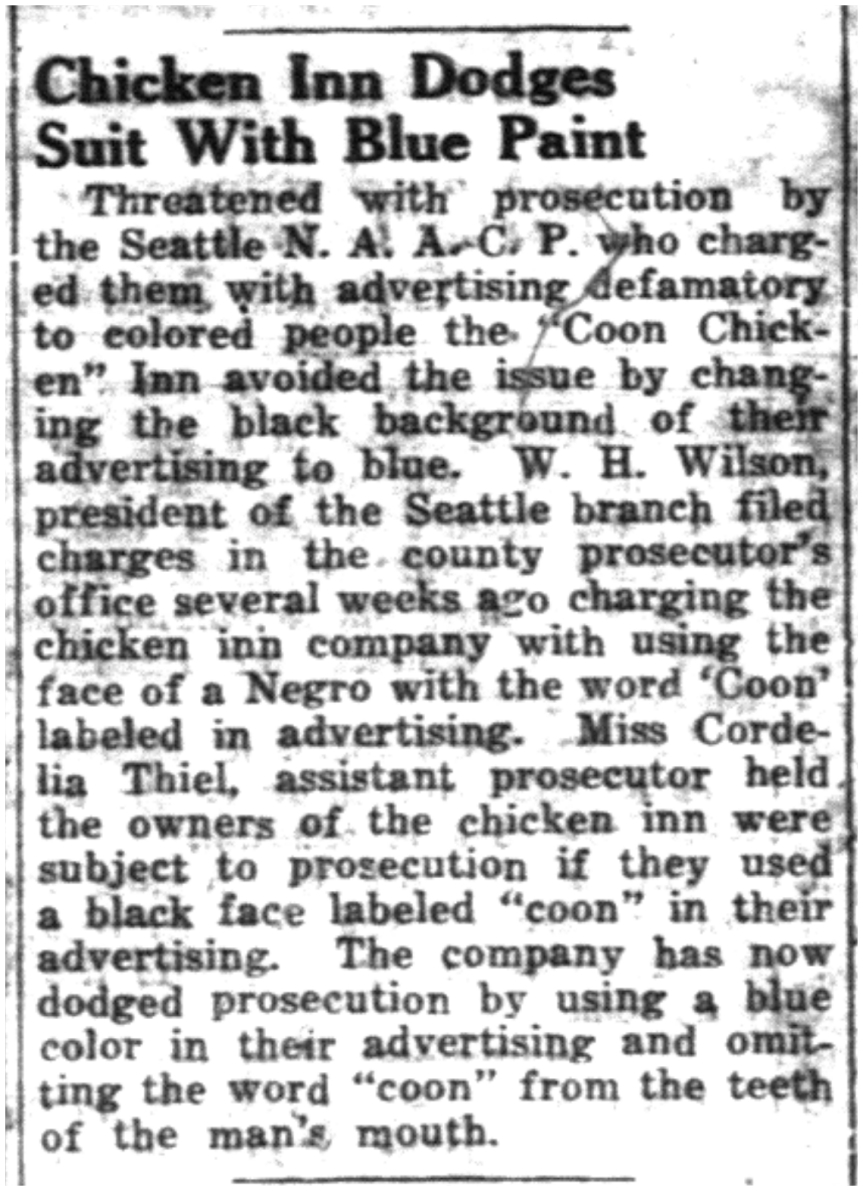 In response, and to avoid further litigation, the Coon chicken Inn painted the black-face blue. 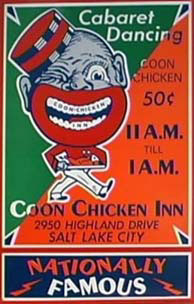 When sued for being racist, the ownership chose a technicality sort of solution rather than ending the racism. The NAACP were not pleased but the courts were satisfied and the local public never cared in the first place. People kept eating there till 1957.

Black face has never not been racist, but it was, and has been, acceptable by the general white American public for more than a century. Racism was not just in the South, nor was it just the way some people treated black people. Racism, or anti-blackness, was a pervasive part of American culture- like apple pie and baseball.

That does not go away over night. The ripple effect carries consequences well into our day and when we, us now, are confronted with those consequences we would do well to consider for whom we are concerned. Are we more worried about the careers of white politicians or the day to day lives and status of black people?

Studying the history of black people in America has taught me a few things that I believe important.

I have learned what I think most of us think we already know; that human greatness is an historical constant and exists at equal rates across all racial and ethnic lines. In other words, there have always been amazing people, saints and or geniuses, and that no one group of people holds a monopoly on producing that greatness.

I have also learned that segregation and racial hierarchy are not natural occurrences. While some level of greed or tribalism is natural and present in most all of mankind, those negative tendencies do not naturally act out or manifest along the color line. People do not naturally group themselves according to the amount of melanin existing in our skin. In fact, without outside forces or external motivators, people tend to mix when left in close proximity.

Knowing these two things sheds a bright light on the whole of American history, because that history has very much been about grouping humans by skin color and claiming greatness for one group while attempting to squash and squelch the magnificence of another. Writing or reading this is not an exercise in fault or blame, though we should not shy away from such when earned, but rather understanding the hows and whys of now requires an honest pursuit and acknowledgment of truth. We must acknowledge not just how great so many black people have been throughout the American timeline or within American borders, but also how forcefully and intentionally America as an organization, has worked to resist, trample, and exploit black greatness in order to favor white people.

This is not revisionist history or America hating, this is what the bulk and majority of American history, law, and practice, has been. Because this sort of race stratification and hierarchical division is not natural, there have been ups and downs, progress and regression over time, as some black and white- and brown- people have pushed and fought for racial equality, and those efforts have been met not just with personal resistance, but intentional and systematized attacks.

Because there have been ups and downs, we, all of us, must know the hows and whys of yesterday because whatever our now is, whether it be an up or down, we must know that it is not guaranteed nor has it ever been permanent.

And we are the ones who create it. We make up whatever now is. It has never been “just the way things are”. It is always however we make it.