Every now and again​​ Yelp serves up more than you expect. I picked the Foundation Room because it was the closest thing to my location with an acceptable number of stars.  What I got was almost enough to inspire an arson laden revolution against Olive Gardens world wide. But do not fear, as I think your endless bread sticks are at least one Yelp dollar sign into safety. I don’t think I could rile up the masses for anything past 2.​ 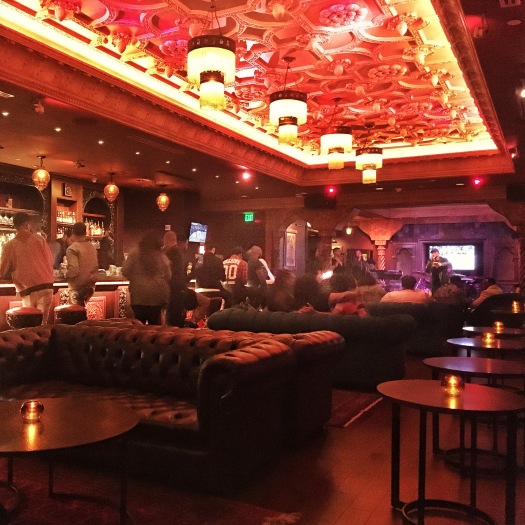 The Foundation Room is the restaurant lounge attached to the back of Houston’s House of Blues. I guess this makes it a chain establishment, which should offend me, but it didn’t. The decor could be best described as South Asian rock n roll in red and orange, the service was casually attentive, and the food was the best I’ve had in Texas. I would need to investigate the locations in Vegas, Chicago, or New Orleans to see if the ambiance is dictatorially scripted, but after testing Texas I might be up for finding out.

I chose to eat in the lounge with the live music, versus the back room with booths, making it my own fault that the table was at knee level. Moving sauce covered chops from plate to mouth without dripping on your suit is hard with a table that low. My scientific testing says it is impossible.

But whoever that no-name, or maybe not-yet-name was, up there singing Jill Scott and D’angelo covers, made the suit splatters worth it.

Yelp didn’t tell me I would hang out way past my bedtime, or long after the check was paid, just because I liked being there. I’m not sure I have ever loitered past paying at an Olive Garden.

When asked about food I easily fall into an oft repeated diatribe against chain restaurants. Occasionally I wonder if I am being unfair. But then I remember that I have not once, not ever, seen a pickup unloading stacks and stacks of mesquite logs at a Chili’s, or T.G.I. Friday’s, or any other of those other places that list “smokehouse” items on their menus. 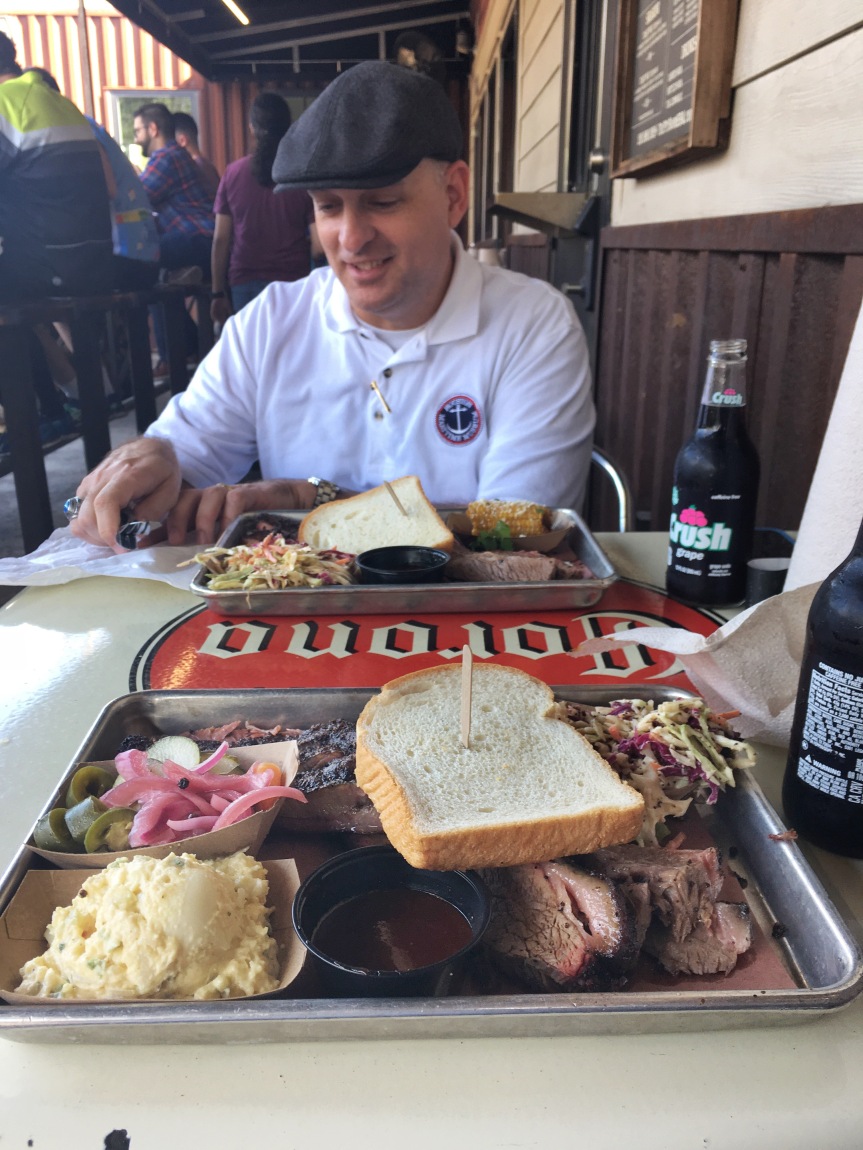 So when I recently visited Texas I did not eat at Texas Roadhouse, but rather my brother took me to an actual Texas roadhouse. 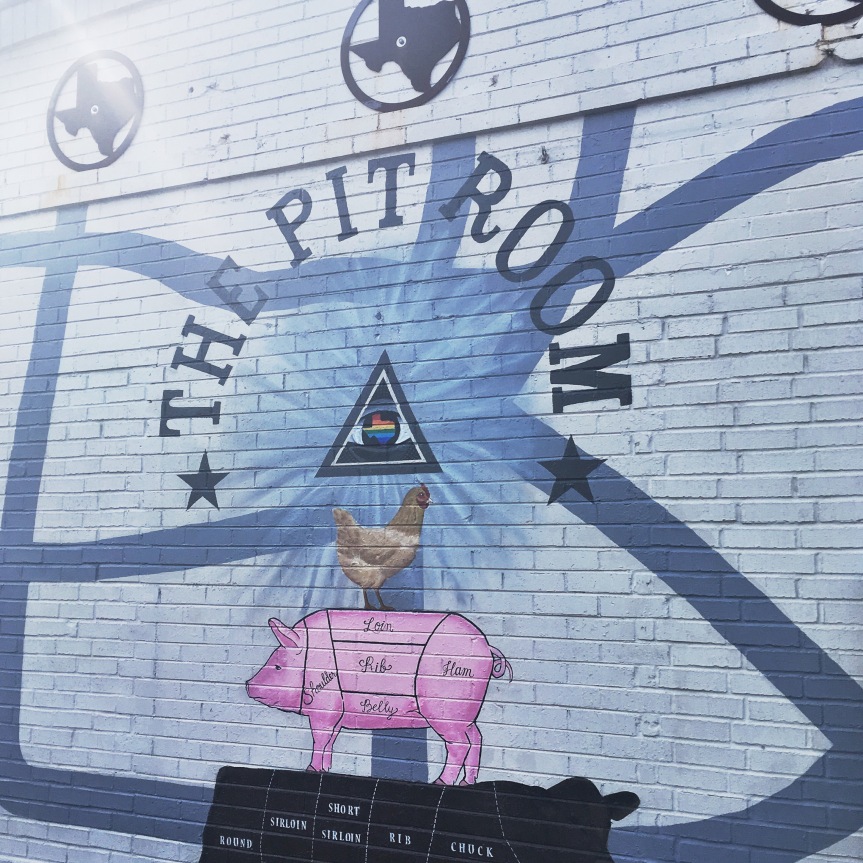 Ribs and brisket, side of slaw, potato salad. The food was great, the company was even better (because it was my brother), and while we comfortably ate outside in November, two guys were adding mesquite logs to the stacks that surrounded the building. At the Pit Room in Houston, the wood decor isn’t decor, it is fuel for the fire. No shtick, just barbecue.

So moving forward, should you want to know how I feel about eating out, just know that I no longer have any reservations about my explicit, overt, stated-up-front, bias against those share-holder liable staples of mall parking lots nation wide with their dispassionate standardized menus and liquid smoke injected ribs. 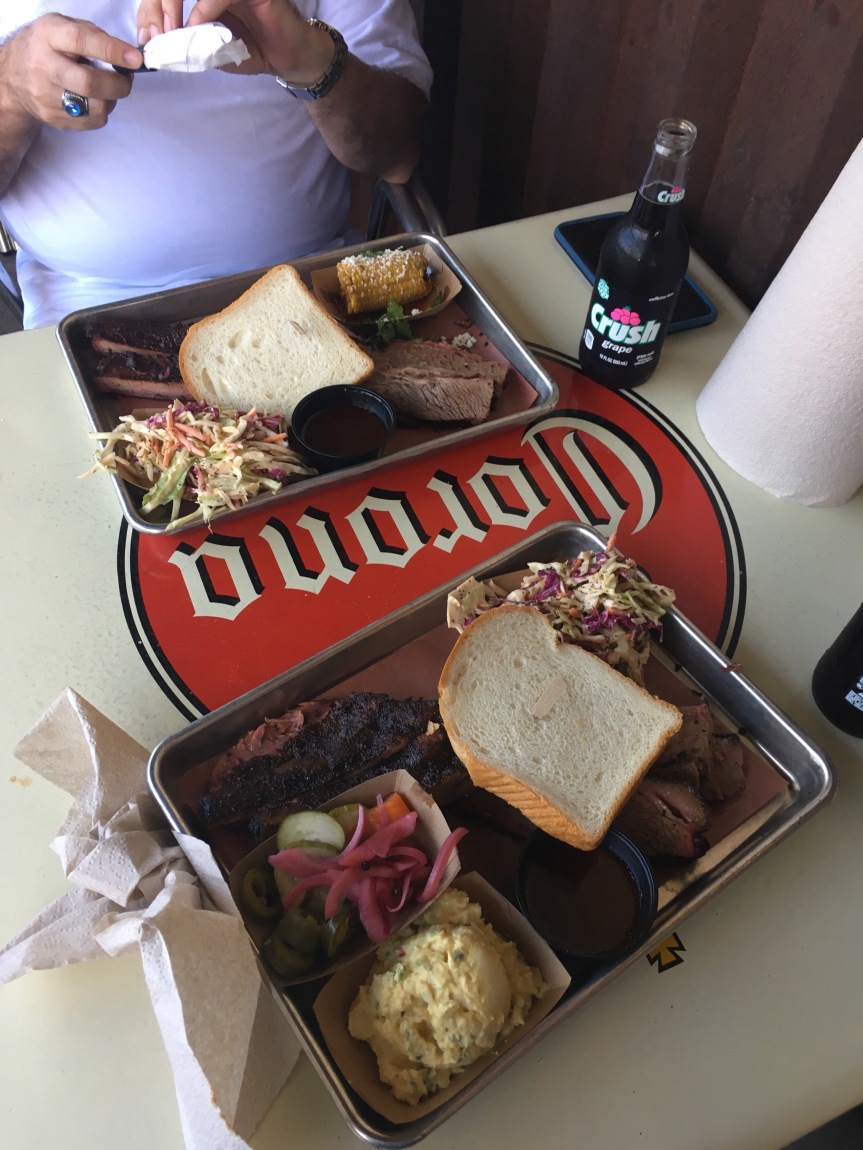 Bob Marley’s song Buffalo Soldier was played at every youth dance I ever attended. I’m not exactly sure why that song, out of Bob’s hundreds, was such a mainstay on the dance circuit, right alongside Alphaville’s Forever Young, but without fail you would hear that brass prelude, duuuuuuuh- duh dah. Duh-duh, dah-dah, duuh da-da! Then we would all start bouncing and singing along.​

​They didn’t play that song at the National Buffalo Soldier Museum grand opening in Houston Texas this Veteran’s Day. It was noticeably absent. My brother and I on the other hand, were present. So were a grand assembly of 10th Cavalry reenactors. 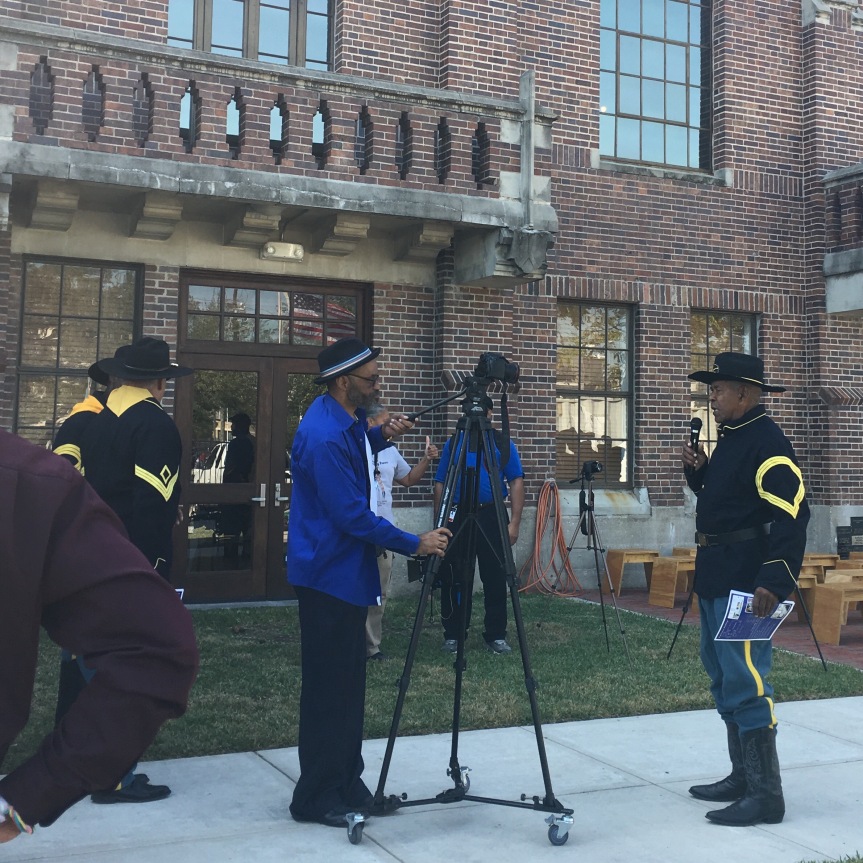 Formed in 1866, the 10th Cavalry, while not being the United States’s first black regiment, they were the first black regiment formed during peacetime. Now of course “peacetime” is a bit of a misnomer since the U.S. was indeed engaged in a number of armed conflicts with various Native American nations, and also Spain, and then Mexico, and also with a bunch ranchers, miners, and farmers intent on putting the “wild” descriptor solidly into the Wild West.

From 1866 through 1918 the Buffalo Soldiers fought against all of them. They fought well enough that over that time 26 of these soldiers were awarded the Medal of Honor. All those medal winners are notable for a number of different reasons, but the biggest one, is that despite those hard to earn honors, officials in the United States government, the military, and white Americans in general repeatedly withdrew praise or sanction whenever things got anywhere near complicated. And by complicated I mean whenever white people complained.

This makes sense when considering the relationship between black people and the United States overall. It has always been this sort of “complicated”. Let me offer a few examples that illustrate what I mean by complicated, and remember, these guys earned 26 Medals of Honor.

After the civil war, where black units like the Massachusetts 54th earned high praise, the ever striving Armstrong Custer accepted a demotion rather than accept command of the Buffalo Soldier’s 9th Cavalry. With a lower rank he took command of the 7th and headed for Little Bighorn.

John J. Pershing, before he became the commander of all American forces on the western front of World War 1, was the commander of the 10th. He sang the unit’s praises and in return was mocked by the rest of the army who gave him the derogatory nickname “N—-r Jack”.  When Woodrow Wilson, the president who re-segregated the Whitehouse staff and held screenings of the film Birth of a Nation, placed Pershing in command of the whole army, Pershing abandoned the black units, handing their command over to the French. He refused to allow any other American units to integrate with, or be commanded by, anyone but other Americans.

In 1897 the Buffalo Soldiers were considered the best equestrians in the armed services and it was proposed they take over the riding instruction at West Point. This proposal was ignored or declined for ten years till 1907 when West Point’s cavalry unit was designated as a colored unit. It remained so till Harry Truman desegregated the Army.

It should be remembered that this period in United States history, let’s say 1866 through 1920, encompasses a number of different era’s ie. Reconstruction, Industrialization, the Gilded Age, the Nadir, Westward Expansion etc. I call that entire time “White People Gone Wild”. Those were the days where defeated confederate soldiers burned down black neighborhoods to regain political office. That was back when live ammunition was used to break up steel worker strikes. This was when prospectors got military backing to kick Sioux of their designated homelands, bison nearly went extinct due to recreational slaughter, and Chinese immigrants were encouraged to help build railroads after which they became the target of our countries first immigration law aka the Chinese Exclusion Act. This was an era where America decided, officially on paper, that it was going to not only stretch from sea to shining sea but that it would also continue to be explicitly the home of white people. And the government was more than happy to wield black soldiers in the fight against brown people in order to establish national whiteness.

That is what I mean by complicated.

All history is messy. American history around race is especially so. Things aren’t all that clear cut today either.

But what was clear on Memorial Day in Houston Texas, is that there exists a strong tradition of African-American military service and a well-earned pride in the history of that service. A pride that despite its complications was fought for and claimed, and it is a history that should be preserved.

California, just like Texas, is kind of its own place. We don’t normally relate the two today, I blame the 60’s, but believe it or not both places have cowboys. Both places have also once been Spanish colonies, then Mexico, then their own country, and then a state. Oh yes, and there were plenty of people living in both places long before Spain showed up (though I wonder why anyone would have ever lived in North Texas or Barstow).

Californians are always trying to be innovators and ahead of the curve, in any way they can, so naturally they tried to imitate Texas.

As the capital of the Spanish state of Alta California, Monterey was the focal point of Anglo American capitalists and settlers.  Mexicans kicked out Spain in 1821 and then things got a little silly. 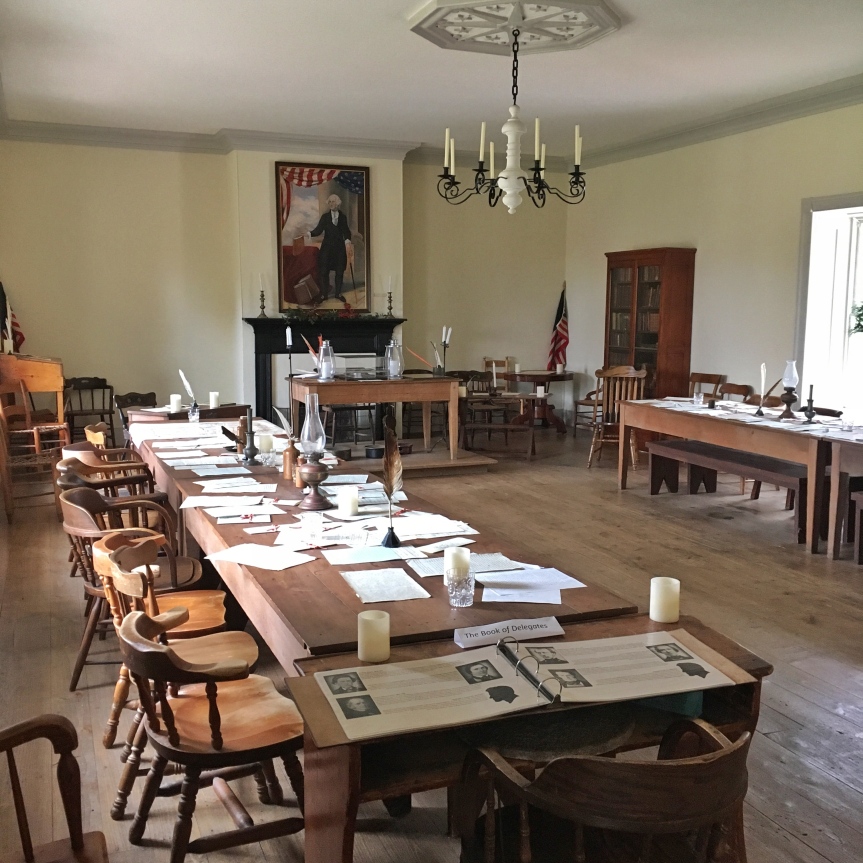 Americans kept immigrating illegally to Mexican California and when they couldn’t get the support from the Mexican government, they decided they would just make the place America.

But first they declared independence. They raised a flag with a California Bear and one lone star… like the one in Texas. These Americans living in Mexico declared they were their own country of California… and then later that same year (1846) America went to war with Mexico and the folks with that bear flag said “just kidding independence. We would rather be America.”

So in Monterey, amid the nice little coffee shops and a remodeled Cannery Row, you can find an Independence Hall just like in Philadelphia. Remarkably like Philadelphia. feather quill pens and everything. 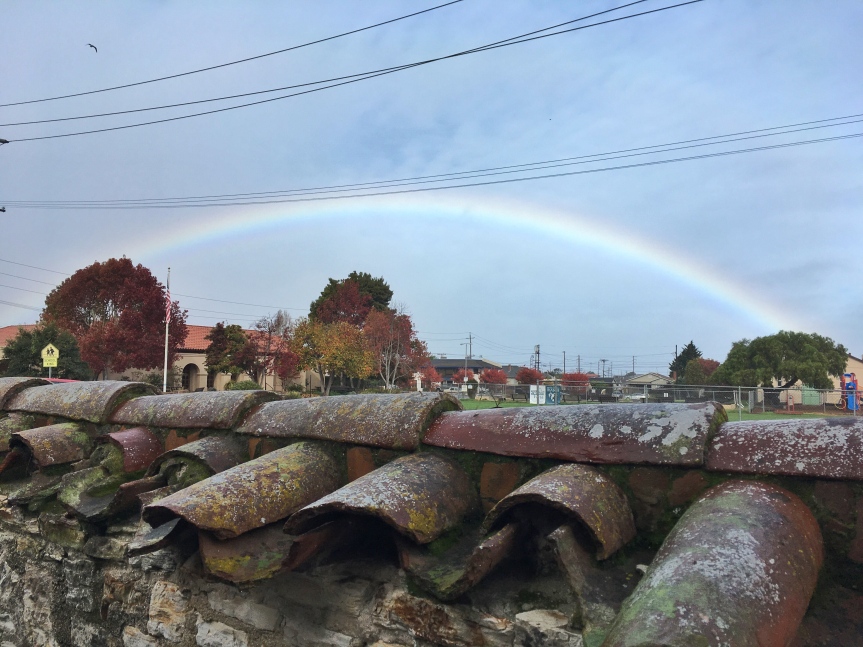 Then Texas struck oil and California struck gold, Hippies moved to San Francisco, and depending on who is president, both states talk about secession. 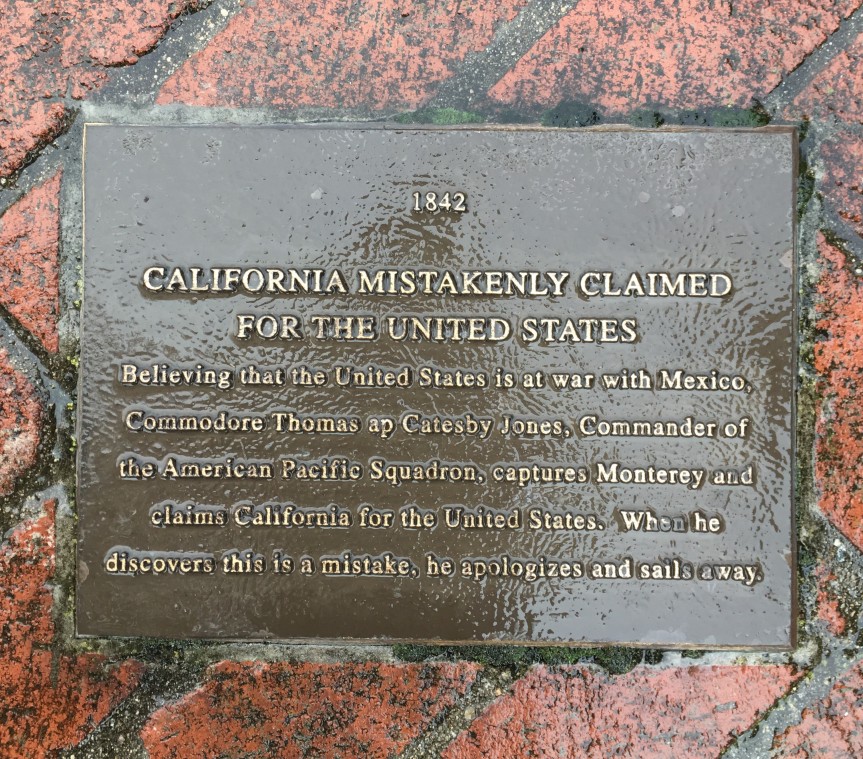