It felt like going home. I didn’t grow up there, I don’t live there now, but it still feels like my home.

Philadelphia has a new spire in its skyline and the weekend I spent there recently was one of the more “Philly” sorts of weekends I could have imagined. 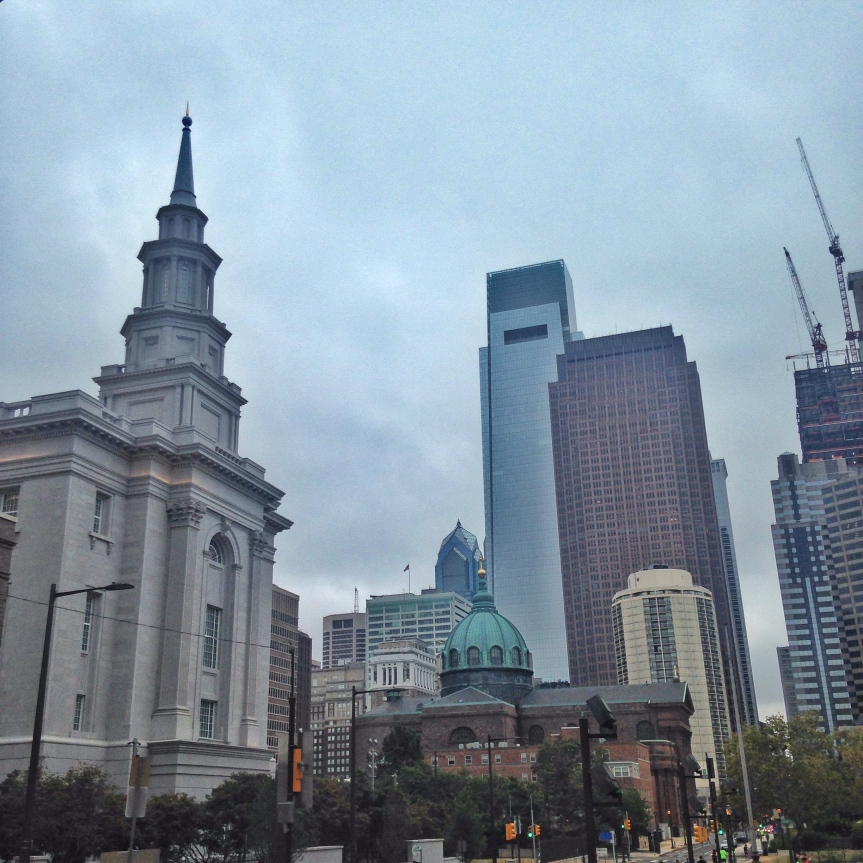 What once required a lot of car pooling and a three hour drive to DC is now a subway trip for them… and an all day flight for me.

it was worth the trip.

I sold the van.

On Monday I will be tucked cozily into a cubicle at a “respectable” job.  Nine to five, Monday through Friday, forty minute commute; I will be one of “them.”

This is just one step in a larger plan.

Yesterday, my plan was to make like Napoleon (Dynamite not Bonaparte) and do what ever I want.  Had my wife granted herself her own day she probably would have spent it in some family activity focused on the children.  I wish I was, but am not, that selfless.  I boarded a bus and went to the city.

I travel better by myself.  No worrying about if others are bored while I am entertained.  No ticking from the time bomb built-in to all children; just me and my own fancy.

I will spend the foreseeable future constrained by schedule, on this trip I defied planning and let whimsy be my guide.  Except for that one appointment in the afternoon, the bus schedule, and a budget.  I am not very good at whimsy.

The temple, a museum, and a library; look out I’m out of control.  Some time earlier I dropped my camera and lost the ability to see the images on the camera.  I now shoot from the hip.

Perhaps it is my appreciation for the honorable Robert Nesta, but finding myself in a room filled with third century books of scripture, I spent my time squinting at Coptic writing from Ethiopia.

Television tells of our society being in decline.  We are taught to fear urban centers and the youth therein as dangerous.  Public libraries, full of common folk, encourage me to turn the television off.

The internet puts the whole world at our fingertips.  The East Coast puts a good portion of the world available for personal visits.

Ms. Hovey gives good dinner advice.  After our meeting I moved on.  I have no shame and do not find dining alone in any way awkward.  The conversation is of course lacking but the company is always top-notch.  On this occasion so was the food.

Day trips to places that aren’t your home, traveling alone, get tiring by the end of the day.  I love New York at night but the excitement of it is lost when there is no one with which to share, or when your knees hurt and the only place to rest requires a purchase.

Had I a van I would retire to the hammock.  But isn’t this the city they say never sleeps?  I suppose the city wanted company as much as I did.