This guy makes basketball shoes. As in he takes basketballs, cuts them up, and makes them into shoes. These aint Nike they are Spalding couture. He does the same thing with baseball mitts- turns them into purses. He is designer, tailor, and a brand all of his own making.

I didn’t know about AL before I wandered into his shop. I was just window shopping, sort of strolling along San Francisco’s North Shore neighborhood and it was just the next door in a row of others, I had just gone ga ga over cheese in a spot across the street, so I was already in a good mood. I stepped inside and was struck by what I found.

Let me state clearly that my not knowing about Al’s before I got there was a personal deficiency. I have since learned that not only is he not new, but he has been a front running outfitter for the cool kids since I was a child. When I struck up a conversation with him I recognized the sort of approachability and openness that I have found in so many other true leaders in their field. The ones who no longer need to prove themselves to anyone. The ones who have shown their worth to all who matter long ago and are still doing what they do, but out of love for their craft- not chasing status. Those people are always happy to talk with anyone, even those like me who have absolutely nothing to offer, if you are talking about the work.

Al’s stuff felt new. Not new like fast fashion plastic and tin foil from Forever 21, but new like ideas. New, like a digitized camouflage suit jacket , which would never be my thing, but kept me transfixed when I saw it on his hanger. I will not venture to say that he is the first one to make a camo jacket, but he did it in a way that felt right, not like a gimmick.

But with a double dose of creativity and cool. 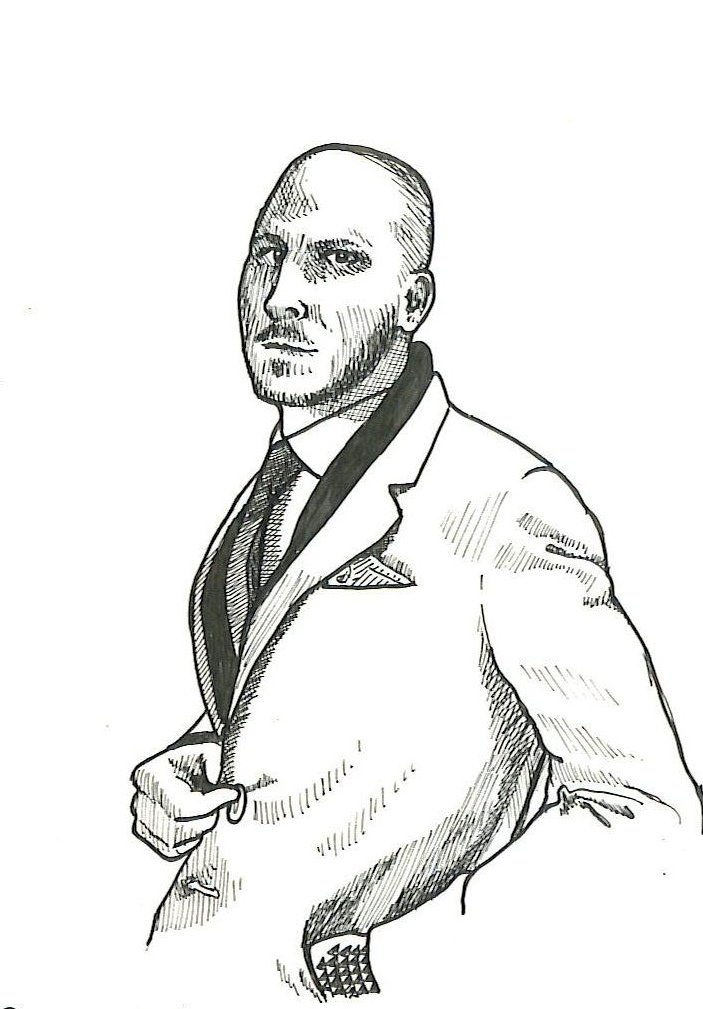 We talked about clothes, but not really about his clothes. Funny for a guy whose business and the reason for our meeting, is the fact that he makes clothes. I’m not going to tell you all about them, claim they are the highest quality, or state that they are the proper style. I won’t do that because I don’t know enough about clothes to be trusted. To learn more about what the shirts look like, the quality of the suits, all that stuff, go to his website. Better yet, go visit him. For that stuff, I’m not your guy.

But here I am; here we are. I’m going to recommend you take a look at his clothes because I believe he means it.

Four years ago or so I joined his email list. A silly thing to do in that he had no location, we had never met, and all he had was a web page advertising a custom made shirt. There were no prices listed, nor any products. But I joined. I joined because I like the look of that single page.

“Commonwealth Proper,” was the company, coming soon was the bulk of the text. I cannot recall how I found the page, but I paid attention once I saw it. That was then. Now he has a Rittenhouse Square location where he fits clients for custom suits. I get emails alerting me to craft liquor tastings on Thursday nights, not my thing, but the look of his spam keeps me on that list. Last week I found myself on his stoop ringing the bell. I was early, no one answered.

Just before “on time”, my phone buzzed in my pocket. It was him letting me know he was almost there. By almost he meant he was the guy on his cell crossing the street. He had just got in from LA at six that morning, just finished a fitting, and was squeezing me in before another. He is no longer the guy with a web page but no products or prices. We sat down in dark leather armchairs beneath mounted antlers, and I began by making sure he understood that I was nobody. He believed me and he didn’t care.

He grew up playing soccer at Princeton High School. He wasn’t someone then, but most of the kids he went to school with were the children of someone. He wasn’t a style icon, he just played soccer. He was a goalie. He was a later a goalie at Vanderbilt, then Lafayette… then in London and in Guatemala. He claims his checks weren’t the big ones, but he was living the life, playing soccer in places that cared about soccer. Then he wasn’t. He had to decide what was next. Law school. Rutgers Camden.

He explained that back in the day he had a company making polos. He would hop on a plane go to places like China sourcing stuff, getting things made. “I was basically just messing around, copying other people’s stuff,” he explained. He folded the company but kept making shirts. He was in law now and needed dress shirts more than polos, he adjusted to his own reality. “Fit is king,” he touts and he practiced on himself and willing friends. He was strict about his shirts being American made, not as a job creation program, but because he had learned he couldn’t control the quality when thousands of miles and at least one language stood between him and manufacturing. He cares about quality. That’s how he got into making suits.

“Here I had all these great, quality, shirts and then realized I was still buying my suits at H&M.”

But he was a soccer player, lawyer, shirt guy, how do you make a suit? So he went up to Brooklyn and New York and hung out with guys who had been doing it forever, asked them everything they would tell him, really tried to learn something.

“Really, I’m completely living this thing and I’m loving it.”

He is living it. Him living it is why I’m writing this. From the stoop to the showroom, to the maps on his ceiling, he was excited. He talked about Philadelphia’s place in history, both the nation’s and the garment industry’s. He talked about the taxidermy on the wall and the reclaimed wood candle holders. His perfectly curated clothing and environment are what he wants. He smiles about all of it because he did it. No really, he did it. As in he ordered the maps and the brass eagle on eBay then mounted and pasted them up himself. He takes measurements, does invoicing, and licks envelopes. The former pro-athlete lawyer licks the envelopes, isn’t afraid to tell me so, and appears to be enjoying it.

Clothing, style, and business are tricky things. If you go online, or talk to the guy next to you, ask your girlfriend or wife, read a book or talk to your boss, they will all tell you something. You can get advice and rules from every direction; some worth listening too, some not. At the end of the day you should be happy with what you wear. That is what I liked about Craig, he is doing it because he likes it, and that is helping him do it right. Not right as in, this is what the rules say, I don’t know or care enough about all the rules to know if he is doing that part “right”, but doing it right in that he cares and loves his craft. To me that is what “getting it right” is. I just so happen to like his taste and style. I’ve got my finger in the wind enough to know that others will like his style as well.

One might think he gets his taste from that same method. Perhaps a little. But here he was, talking to me, I was taking notes, and he isn’t touting his pedigree or proclaiming his greatness. He’s telling me he learned style from his older brother, whom he says is, to this day, the coolest person he has ever met. I mention a bunch of bloggers who are big time, and he writes down their names. He talked about how shopping isn’t supposed to be a condescending sales pitch. He says a guy shouldn’t have to be told what to wear, but rather talked too and taught. He asks why a guy can’t enjoy a clothes buying experience. He asked the question as I sat in a high ceiling room with portraits of civil war generals over the door, and I imagined a guy could enjoy this.

Because I did and because he does.