In 1961, back in the days of Gidget and the Endless Summer, a seamstress named Carrie Birdwell Mann started making and selling swimshorts at her Orange County home. More than 50 years later the company is still in O.C. making pretty much the same thing, and for the most part- only that one thing. 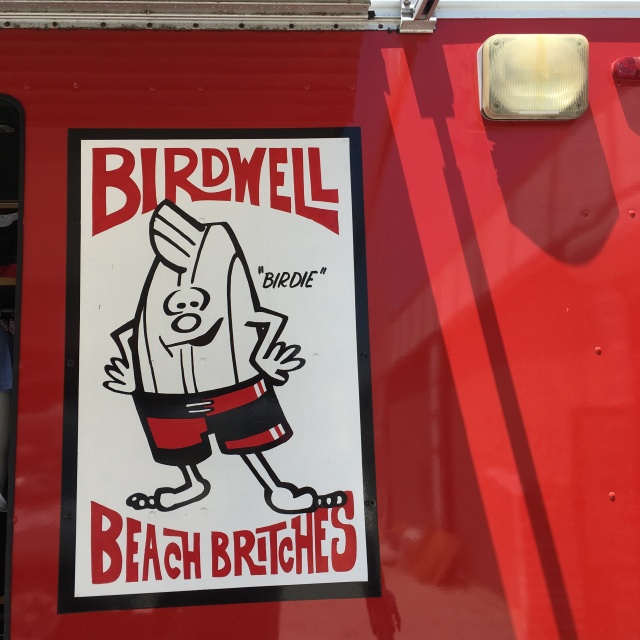 Not to take away from what Quiksilver, O’neill, or any other surf brand have accomplished, but when it comes to boardshorts, Birdwell is what all of them are trying to be.

Like any responsible adult, the folks at the factory were a little leary of me when I showed up asking questions. But once they determined that, as they put it, “wasn’t up to any weird @*!!” they were more than happy to show me around.

The family sold off the business, or as the current owners say “entrusted” them in 2014. Since then, a couple things have changed, while some other significant things have not.

While this may have removed some whimsy from the whole purchasing experience, it did make predicting if the shorts were going to fit a little more reliable.

They also updated the van.

And by updated I mean they painted it not fixed the engine, which is why I found it parked comfortably in the factory parking lot.

What they didn’t change were the people working the floor. They have remarkably low turnover and most of the folks sewing the shorts today, are the same folks who sewed them ten years ago.

*I said that not them* 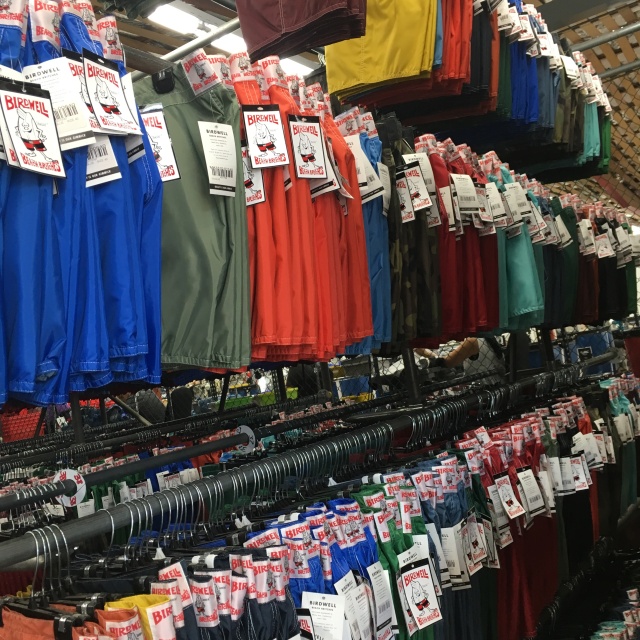 It is interesting that in our modern world of fast fashion and quarterly shareholder returns, there can exist a company and brand that survives without attempting to broaden offerings in order to capture market share or lowering quality to widen the margin and spur more turns.

They didn’t do that and they are still right there.

But if taking steps past big box mass retail is a sign- I might be on my way. 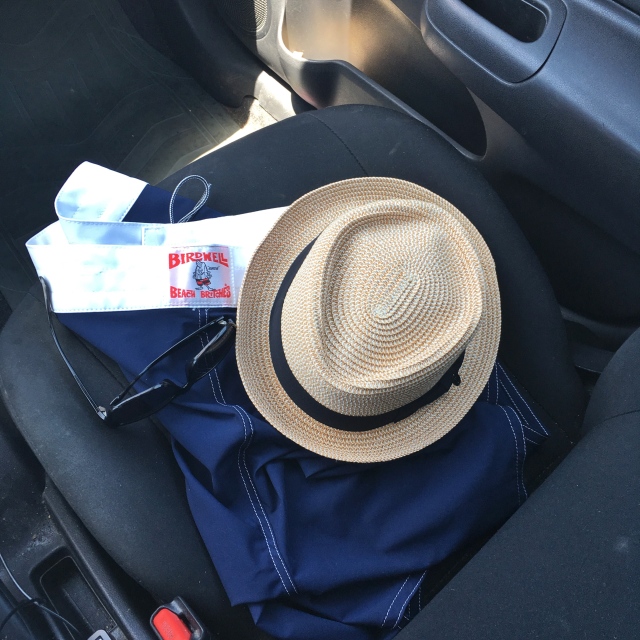 It is the sort of place that surely has some history, possibly some substance, but mostly it has an image. The beach is beautiful, peppered with surfers. People wearing shorts and sunglasses drive convertibles to the marina past white stuccoed buildings flanked by palm trees.

I did not see it, but I sort of assume everyone here writes everything in cursive with pink glitter ink.

You can rent beach cruiser bicycles and eat arugula salad on sidewalk cafe. You can visit a Spanish Mission or fish from the pier. You can do or see all the things you imagine doing and seeing in California minus all the things you associate with LA.

It is all Saved by the Bell and no LA Law. It might be a little bit Flaked – but glossier.

I’m not sure who actually lives there, though I have heard some stories, but most people I know only visit. They, or we, drive in and stay the night. We shop and browse light breezy dresses, Tommy Bahama, and beach towels fashioned to look like the California state flag. We eat something light then pay ten dollars for a scoop of ice cream on the pier. 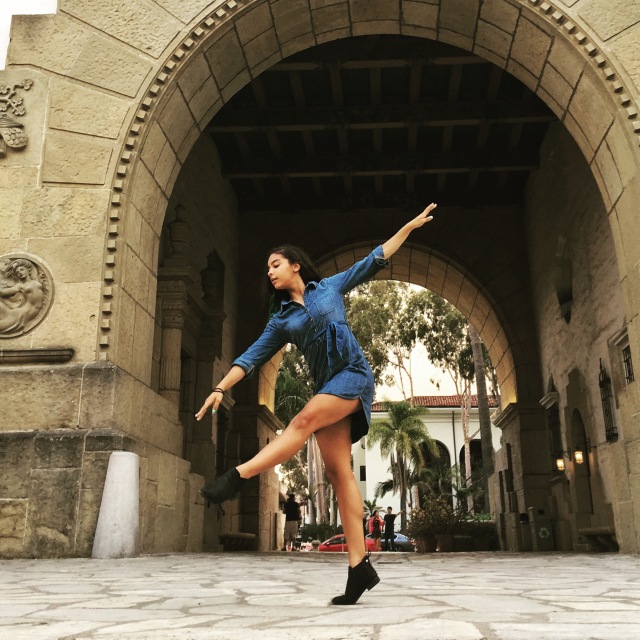 Then we get back in our cars, sit in traffic, sit in our cubicles, sit on our couches watching Saved By the Bell reruns, and do our best to ignore the pan handler at the off ramp. 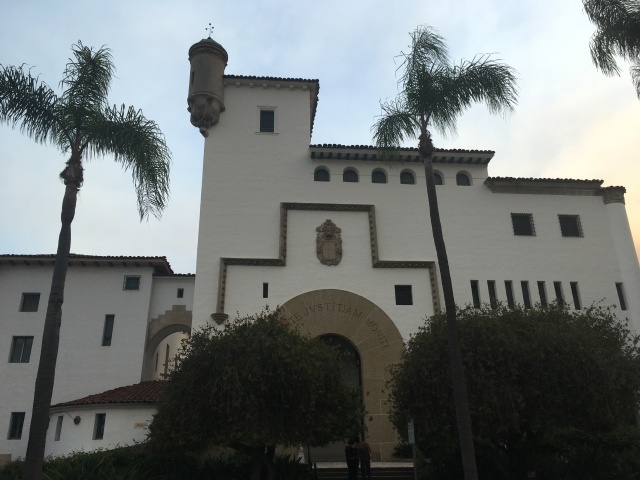 I do not live in a beach town but as Californians we are required to visit the beach regularly. When others in our environs learn we are headed to the beach they unfailingly ask, “Which beach do you go to?” This is not worded, or meant, as an inquiry to this instance, but rather a broader declaration.

I refuse to declare a beach affiliation.

But we did recently visit Balboa Pier in Newport. It was nice.

“It was nice” is no sort of manifesto. It isn’t even a resounding endorsement. But the place was in fact “nice” and if you please I will now walk backwards into a more meaningful review.

California doesn’t mess around with those silly beach tags like New Jersey. The beaches are quite literally a “free for all”. Whats not to like about that. Nice, right?

The Pier itself houses the original Ruby’s Diner. Not a culinary powerhouse by any means but an Orange County staple none-the-less. You can eat your burger while sitting on the rooftop deck watching the sun set over the beach. That would make anything taste great no matter who cooked it. 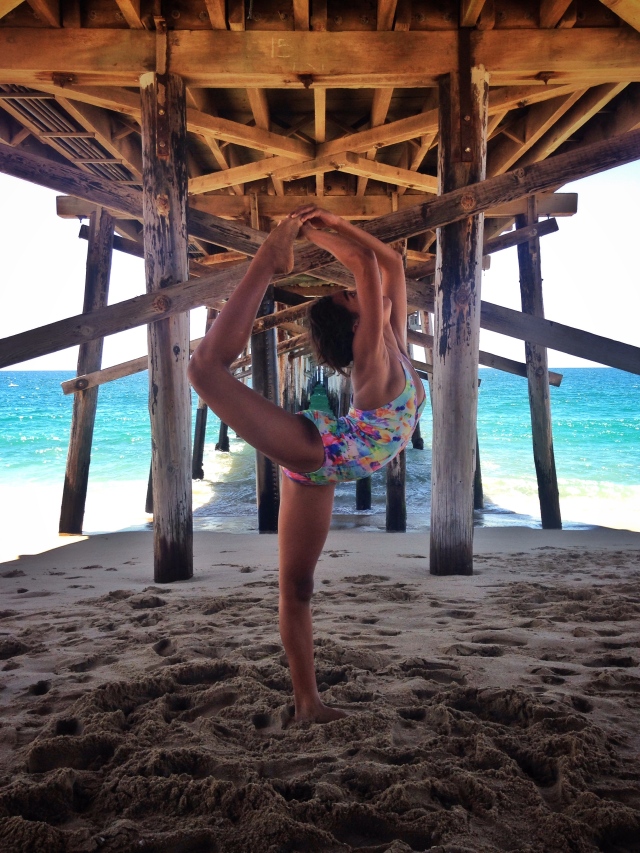 If cold water and waves that break right on the sand aren’t your favorite you can always head for the boardwalk.  There you are treated to arcades, shaved ice, and carnival style rides like a bucking shark. Who doesn’t want to ride a bucking shark? 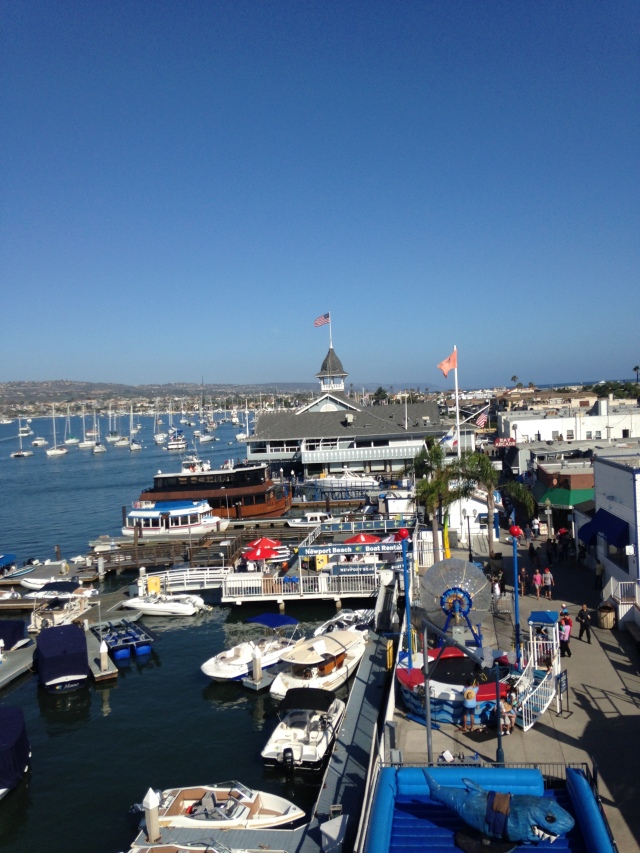 None of us wanted to ride the bucking shark but we did ride what was marketed as “possibly” the longest Ferris wheel ride in the world. It was indeed lengthy. 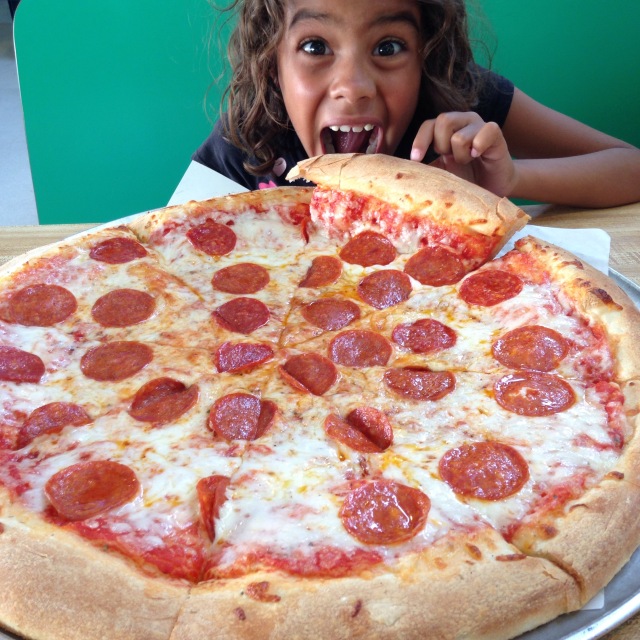 With full bellies we were ready to test the scientifically proven tale that one must wait an hour after eating before swimming to avoid certain drowning. We thought it a safe place to test this tale since there were at least 7 million junior lifeguards on the beach for summer camp. I found myself wondering how many 9 year olds it would take to save me if I were to go under for the third time. 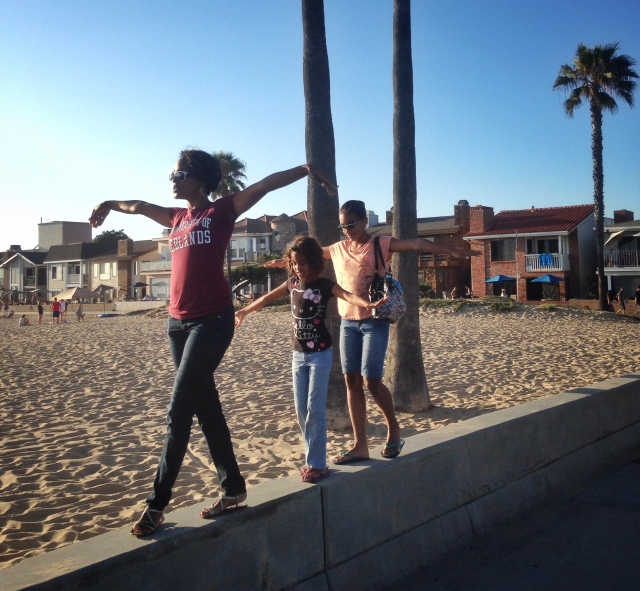 Turns out I am too naturally buoyant to find out. No loss. I’m satisfied stating that Balboa Pier in  Newport is Nice.

Everything being big and new can be both wonderful and terrifying.

That’s what being a kid is, terrifyingly wonderful. Dana Point was wonderful. 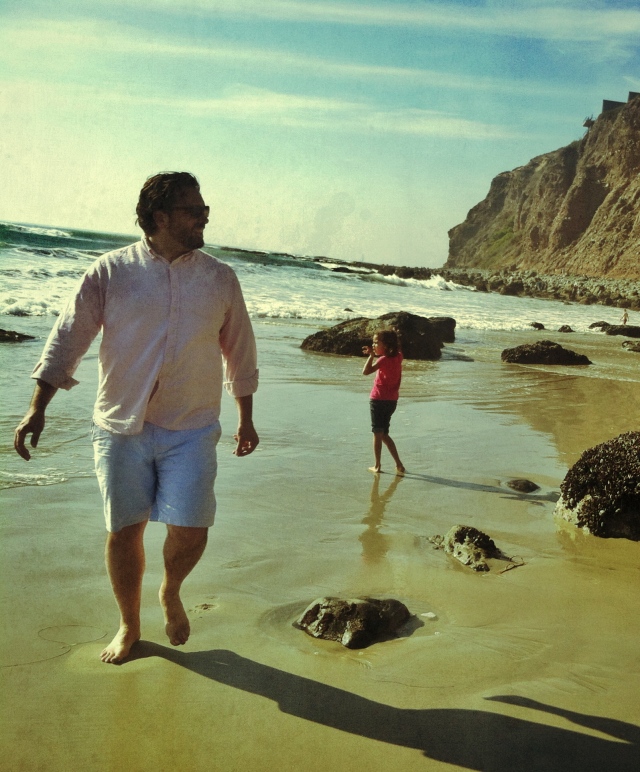 We only went to the beach as an afterthought. Our main intent was to visit the Ocean Institute. That was “our” intent, my intent was to see the tall ships. To me tall ships are wonderful. They stoke within me a primal wanderlust that I am finding increasingly hard to placate. But the institute and the two tall ships it operates, are not for me.

Its all for them.

And they love it. 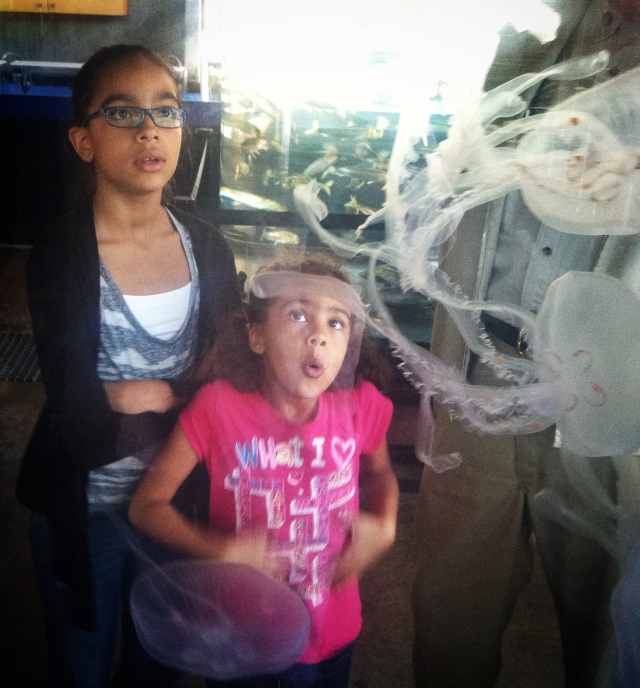 On weekends it is open to the public and the weekend we went they made us feel welcome. I love to observe others doing things they love and the Ocean Institute appeared full of people doing what they love. What they do there is teach oceanography to kids.

A grey haired man walked us around a whale skeleton, another showed us how they practice driving underwater robots. A young woman showed us the tank where she was raising a colony of young jellyfish and another woman helped my kindergartner dissect a squid.

Make no mistake, this isn’t an aquarium or a museum. They don’t just show things here they facilitate doing things. It isn’t just to help people do things, its to teach kids how to do things. Big, new, terrifying, and wonderful things.

We as a generation would do better if we dedicated ourselves more to teaching our kids to do big new terrifying wonderful things.

But still I stare at those tall ships…